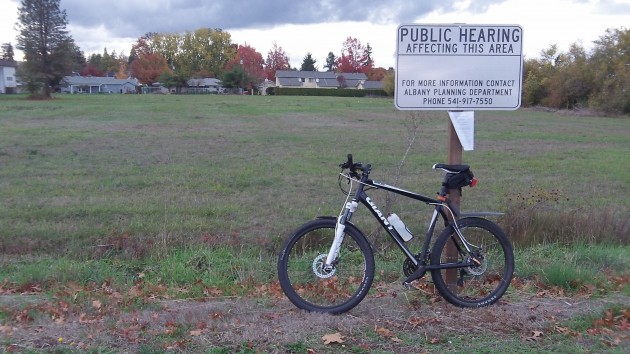 The police site as seen from Pacific Boulevard. Navigation? Fisheries?

We don’t need any more examples of the costly foolishness that is Oregon’s wetlands policy, but we have one anyway. It is the site where Albany next year will start building its new police headquarters.

The vacant parcel, covered with grasses and weeds, lies in the 2600 block on the west side of Pacific Boulevard S.W., between Schoen’s Motors to the north and various medical offices to the south. Cathey’s Ditch flows along its northern edge. The site measures about 3.9 acres.

This past spring a consultant determined that wetlands covered 1.9 acres of it. The Department of State Lands, however, rejected those findings based on a field investigation that discovered additional markers for hydric — or wetlands — soil. The city engineer overseeing the police project, Staci Belcastro, says a revised wetlands delineation has been done, and now the area designated as wetlands covers 2.9 acres.

State law requires a permit whenever someone wants to “remove or fill material in waters of the state,” the Department of State Lands says. The law (ORS 196.795-990), passed in 1967, was intended to protect public navigation, fisheries and recreational uses of state waters, an eminently sensible goal. But 1967 was well before state and federal regulators started to treat seasonally soggy land, namely wetlands, the same as water.

Under current regulations, the loss of wetlands has to be “mitigated,” usually by paying to create or expand wetlands elsewhere. Albany’s budget for the police station includes $200,000 for wetlands mitigation. This is an expense for which there is no practical justification other than that the rules demand it. This site plays no role at all in watery recreation, and certainly not in navigation or fisheries, so there’s no sensible reason for even a state fill permit, at least not under the 1967 law.

The city of Albany is not going to make waves about nonsensical wetlands requirements because it is used to this abuse of state and federal authority. But sooner or later, somebody should. (hh)


7 responses to “Wetlands: Another needless cost”