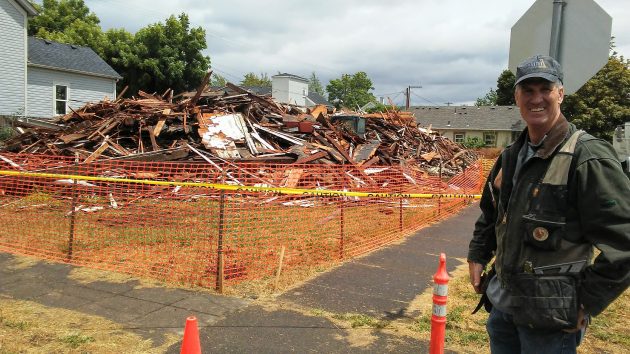 Mark Siegner this morning, looking relieved after the demolition of three houses at Fourth and Calapooia.

The three old houses that occupied Albany city government since 2017 are gone. After the city council cleared the way Wednesday night, homebuilders Mark and Tina Siegner took out a demolition permit this morning and got the structures razed.

By mid-day all that was left on the northeast corner of Fourth Avenue and Calapooia Street were three piles of moldy debris.

The Siegners’ plans for the property are not complete. They’re thinking of something with space for professional offices on the ground floor and housing above.

The property is in Albany’s Monteith Historic District, so whatever new construction is proposed will go through a review by the Landmarks Advisory Commission. It remains to be seen how this works out in view of the strong opposition by some members of that board to the demolition.

After the houses came down today, some nearby homeowners and business people came by to thank them, the Siegners told me. For the last 30 or 40 years, the houses had become increasingly blighted eyesores. In 2017 the city of Albany declared them unsafe to inhabit and boarded them up. The Siegners bought the property, all one tax lot, from the Signs of Victory Mission in February 2018.

Their application for urban renewal funds to help restore the structures was turned down, and Landmarks rejected their request for demolition, staying it for a year instead. The city council then reversed the Landmarks denial. This reversal was appealed to the Land Use Board of Appeals, which remanded the case to the council for adequate findings.

The council voted 4-1 to adopt findings Wednesday night. And the demolition this morning was the result. (hh)

14 responses to “Well, that was quick: Three old houses razed”