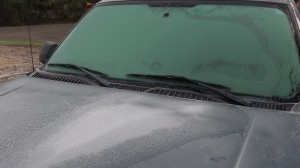 Warming is not the only trend: Time to scrape the ice off the windshield.

When not much else is going on, it’s always fun to talk about the weather and how unusual it has been. On New Year’s Day, for example, the Albany paper had a story about the “extreme weather,” so-called, of 2012. On closer examination, it was not all that extreme. Yes, it was a pretty wet year, but then it was only the fourth wettest since records began, and most of the rain came last winter. The summer was pretty dry. But it was said to be only the second-driest. And so forth.

The same phenomenon can be seen in the reporting about gradual changes in the climate. We are constantly told that we are living in the warmest era in a long time. But then you look at the numbers.

NOAA, the National Oceanic and Atmospheric Administration, publishes all kinds of weather and climate information online. For Oregon, its records go back to 1895, and the agency has compiled average temperatures for the periods from January through November. So what do you think was the warmest year? Anything recent? Nope, it was 1934, when Oregon’s mean was 3.4 degrees Fahrenheit above average.

The second warmest during that period was 1992, but the third was way back — 1926. How about last year? Turns out that 2012 had only the 16th warmest first 11 months since 1895. What about autumn alone? NOAA says that in Oregon, this last autumn was the 13th warmest since 1895. Sixteenth and 13th warmest in more than a century: It’s hard to get alarmed over tepid “extremes” like that.

And what about November alone? NOAA says that for Oregon, the November temperature trend over the last century is down 0.2 degrees Fahrenheit. You read that right. In the age of global warming, the month of Thanksgiving in Oregon has been trending ever so slightly cooler.

All that stuff is online. Just google NOAA. You can look it up. Most of what you see there highlights various warming trends around the world, but cooling trends are there as well. (hh)