We should have listened to her 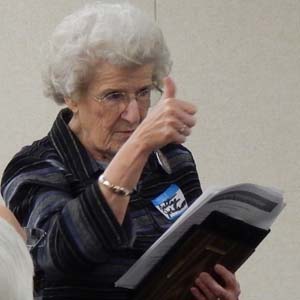 The longer Oregon and the country labor to carry out Obamacare, the more I wish that Betty Johnson and her compatriots had prevailed. Mrs. Johnson, who lives in Corvallis, has just been honored by Benton County with a public health service award, an honor she richly deserves for her lifelong work in helping older people. But she also has good ideas on reforming health care for all.

The award, bestowed annually by the county health department, recognizes someone “whose work has embodied the spirit of compassion, dedication, achievement and commitment to improving public health.” Mrs. Johnson certainly qualifies. She began as director for the Area on Aging for Linn and Benton Social Services in 1972. Then she founded and continues to be involved with the Oregon Health Action Campaign Advocacy Group, coordinating more than 200 volunteers to visit old people in their homes, taking them grocery shopping, driving them to medical appointments and even arranging to build wheel chair ramps for them. She also worked on programs such as Benton Hospice Services, Dial-A-Bus, the Senior Meal Program and Volunteer Interfaith Caregivers, and she helped organize a group to work on a campaign called Medishare.

All this I got from the county’s announcement of her award. I had known over the years only as an advocate of establishing “health care for all,” a state and national health care program that covers everybody. She would come to the newspaper office where I worked and, with logic and compelling facts, pitch her ideas for a system that would meet people’s medical needs with the least possible fuss.
“Single payer” is the label usually applied to that idea, and no doubt it has issues of its own. But it certainly seems more reasonable now that we have seen the vast complications involved in the federal law requiring everybody to by insurance — often with public money — or face a fine. The system we now have still does not cover everyone, is plagued by very complicated technical problems, will require extensive enforcement through the IRS, may yet bankrupt the country with all those subsidized premiums, and seems to benefit mainly the insurance industry. (Why else would they support it?)

The country should have listened to Betty Johnson and others like her before we got saddled with this mess. (hh)

Posted in: Commentary
Tags: health care for all, Obamacare, single-payer


2 responses to “We should have listened to her”