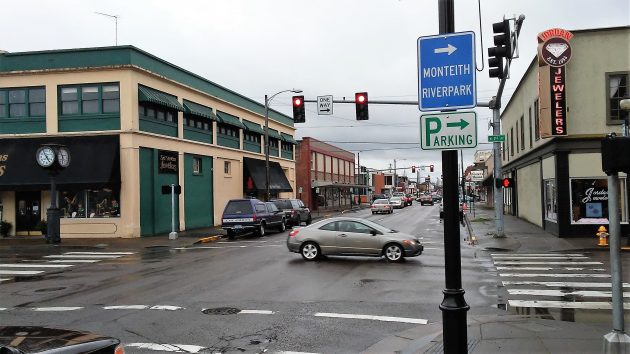 Directional signs like this one would be replaced with much fancier ones under a plan being considered by CARA.

Most members of Albany’s urban renewal board want to install “wayfinding signs” downtown to point out the sights. But they’re not about to pay anything close to $300,000 — which was one estimate — to get it done.

The proposal for new signage was one element of a downtown “refinement plan” from the Portand consulting firm of Crandall Arambula late in 2011. A year or so later, the advisory board of the Central Albany Revitalization Area (CARA) set aside $75,000 for the idea. But nothing happened for quite a while, until the CARA staff eventually arranged for signs to be designed. The results were presented in September 2015, and you can read that story here.

Again, nothing happened for a while — until Parks Director Ed Hodney inherited the main staff function for the CARA program. Before former urban renewal manager Kate Porsche left for another job last year, there was an estimate that the sign program might cost $350,000. Since then, Hodney got a quote from one vendor that put the price at around $300,000.

On Wednesday, Hodney presented alternatives that would further lower the price. But Councilman Rich Kellum, based on checking with some of his contacts in related businesses, found anything in that range to be way out of line, and most other members of the CARA advisory board seemed to agree.

Councilman Mike Sykes, a business owner in his third month on the council, went a step further. Why, he wanted to know, spend any of the taxpayer’s money on wayfinding signs when the vast majority of people, especially millennials, never look at them but use their smart phones to get around places they don’t know. “Is this a prudent thing?” he asked.

Rich Catlin, chairman of the advisory board, countered that one main point of the sign project is to make people, who otherwise would just drive through or past, aware that the downtown area even exists.

The result of Wednesday’s CARA discussion: Hodney plans to check with a number of companies in the sign business, especially local ones, to see how the CARA program could be accomplished for less money. The board will meet again April 19. Based on any new information, it may then settle on a limit of how much it’s willing to spend before calling for formal bids. (hh) 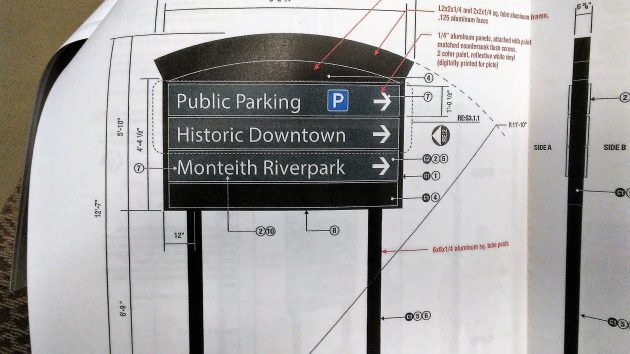 A page in Wednesday’s CARA agenda shows the type of metal signage being considered for downtown.