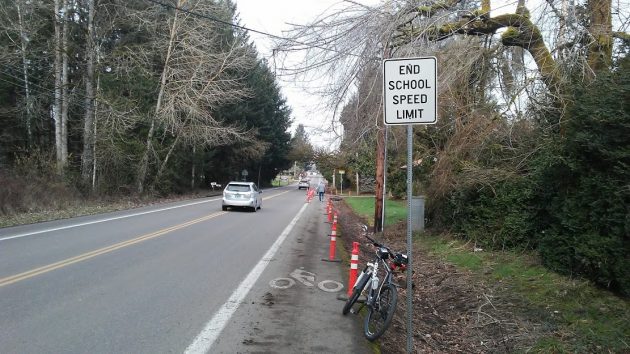 Signs like this one on Spring Hill Drive are missing from the school speed zone on Waverly Drive near South Albany High.

There’s an unexpected development in the story of the $165 speeding ticket that Johnny Scot Van Ras received on Waverly Drive near South Albany High School on Oct. 11.

As reported here, the 62-year-old southeast Albany resident went to trial in Municipal Court on Jan. 28, arguing that the 20 mph school zone was improper for two reasons: It was imposed without an engineering study justifying it, and it lacked signs showing where the school zone ends.

Judge Robert T. Scott took the case under advisement to read up on the driver’s points. On Jan. 30, he wrote to Van Ras.

“After reviewing the statutes and various ODOT publications, I am inclined to agree with you that an END SCHOOL ZONE or END SCHOOL SPEED LIMIT sign is required at the end of every school speed zone,” the judge wrote. “Because this interpretation would significantly impact the City, I would like to request the input of the City Attorney on this issue before entering a final decision.”

Van Ras had appeared for trial by himself, without a lawyer, so Judge Scott was obligated to get his consent to consult the city attorney.

In a Feb. 5 response to the judge, Van Ras pointed out that his trial notice from the court had said the city prosecutor would appear only if the defendant had a lawyer in court. Otherwise, the trial would be between the judge, the officer who issued the citation, and the driver who received it.

Accordingly, Van Ras declined to give his consent to “let the City Attorney provide input on this issue. It is my belief that the Mayor, City Council and the City Attorney have all had numerous opportunities to resolve this issue and have thus far failed to do so.”

Last year, Van Ras and another resident of the area, Diane Conrad, asked the council to remove or change the speed zone on the normally 40 mph road, arguing that the conditions there make it unnecessary. Van Ras also told the council about the lack of zone-ending signs and urged that instead of being in effect from 7 to 5 on school days, the zone be marked by flashing lights.

Albany transportation analyst Ron Irish now has prepared an engineering study that will go before the city’s Traffic Safety Commission on Feb. 18. (A Feb. 4 meeting was rescheduled for lack of a quorum.) The study recommends that the school zone be shortened from the present 1,200 feet to 400 feet, but that it remain from 7 to 5 on school days.

As for the ticket? People who often drive on southeast Waverly may be waiting for the ruling to come out, and Van Ras no doubt hopes that after all this, he won’t have to pay. (hh)