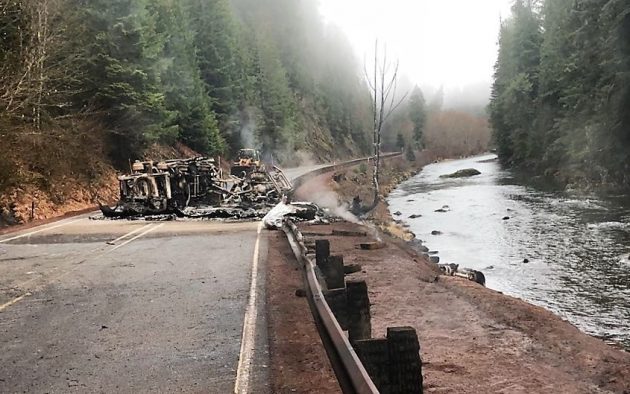 The state police provided this photo the day after the Dec. 15 tanker crash on Highway 22E.

None of the fuel lost in a fatal tanker truck crash on the North Santiam River has been detected at downstream water intakes, Albany City Manager Peter Troedsson told the city council Friday.

The Central Petro tanker crashed and burned near Milepost 64 on Highway 22E about 11 p.m. on Dec. 15. Oregon State Police said the rig apparently lost traction on ice and rolled. The driver, Ronald Edward Scurlock, 59, of Bend, was killed. The truck had been loaded with about 11,000 gallons of gasoline, and it was not known how much of the fuel burned and how much may have spilled into the river.

Albany’s main water intake, for the treatment plant off Scravel Hill, is just below the confluence of the North and South Santiam Rivers, roughly 50 miles downstream from the crash site.

“Staff were concerned about that intake because of its location…,” Troedsson wrote in his weekly report to the council. “However, test results showed all four intakes upstream of the Albany intake are ‘non-detect’ for gasoline constituents. EPA intends to continue sampling daily at these locations until further notice.”

The report didn’t identify the four upstream intakes. From the crash site, though, the river flows past Detroit, Mill City, Mehama, and Stayton on its way to becoming just plain the Santiam River near Albany. KGW reported that Salem, which also takes its water from the North Santiam, temporarily closed its intake as a precaution.

The road was reopened after a few days when repairs were complete. During the closure, the state police said several drivers relying on their GPS systems for alternate routes ended up stuck on forest roads made impassable by snow. OSP’s sound advice: In winter weather, stick to the main paved roads. (hh)

The brain-freeze screwup in the date, as pointed out by the reader below, has been fixed. Thanks.