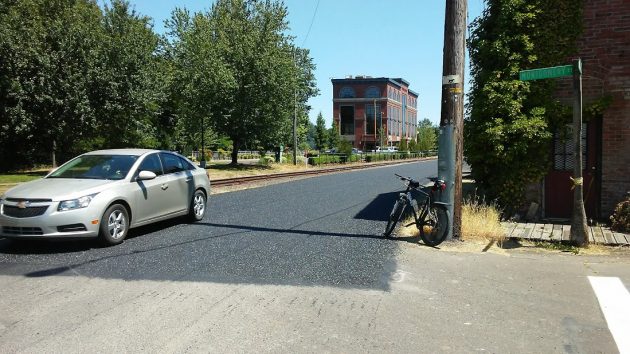 On a bike ride along the Albany riverfront, I could not help noticing that segments of Water Avenue now have a nice new surface. Could the same kind of treatment be a solution for the many old city streets where the potholes resemble craters on the moon?

The poor shape of many old residential streets is a common subject of complaints. The city administration says there’s never enough gas tax or other revenue to do much about it, and Mayor Sharon Konopa’s proposal for a 5-cent local gas tax has been put aside for now. House Bill 2017, the legislature’s package of higher taxes and fees to pay for transportation improvements, is supposed to boost the funds going to cities, but how that works out remains to be seen.

Parts of Water Avenue were never improved as a regular city street with asphalt paving and curbs and gutters. It was essentially a gravel road. Some years ago, the city applied an oil mat and then a “chip seal” treatment to the unimproved parts, and this worked out OK for quite a while. But recently potholes started growing, especially outside the gate where trucks turn in and out of the Parr Lumber yard.

“The surface had started to deteriorate, so we contracted to chip seal it again this year,” Chris Bailey told me. She’s the public works director for operations.

How does chip sealing differ from asphalt overlays? Here is the Ohio Department of Transportation’s explanation: “The difference is in the construction method. Hot mix asphalt pavement is produced by heating liquid asphalt and mixing it with aggregate, with the mix then spread and compacted to form a durable road structure and riding surface. Chip sealing uses the same ingredients as asphalt concrete paving, but the construction method is different. With chip seals, a thin film of heated asphalt liquid is sprayed on the road surface, followed by the placement of small aggregates (‘chips’). The chips are then compacted to orient the chips for maximum adherence to the asphalt, and excess stone is swept from the surface.”

I could not learn how much this treatment cost for the section of Water where it was applied, from Montgomery Street east nearly to the railroad trestle. The person at City Hall who likely has the information is on vacation, and nobody else seems to know.

But if regular paving is too expensive for the city, perhaps this method could be tried to return at least the worst of the old streets to a drivable condition. If it works for Water Avenue, why would it not work for streets where traffic is less and conditions are worse? (hh)