Water Ave.: A future ‘plaza street’ in the smoke 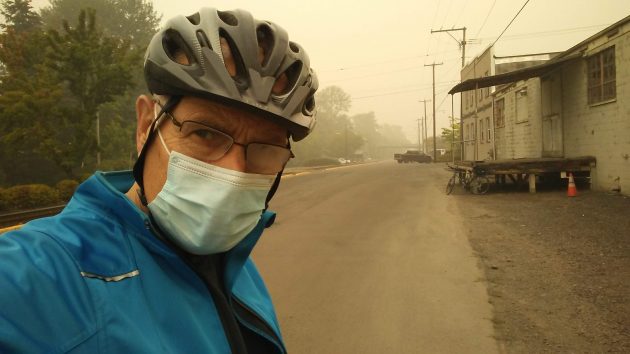 One side effect of facemasks: Your eyeglasses tend to fog up.

Here we’re looking at the west end of Albany’s Water Avenue, shrouded in wildfire smoke on Saturday afternoon. Now try to imagine this as a “plaza street” where traffic can be blocked for street fairs, the farmers’ market, or other public events.

This — the plaza street idea — may survive as the only part of a plan to rebuild Water Avenue between Washington and Main streets, a distance of 14 blocks.

The CARA downtown urban renewal district had planned to redevelop the entire riverfront including Monteith Park, the Dave Clark trail, and the 14 blocks of Water Avenue between Washington and Main streets. But now it looks like doing the entire street would eat up pretty much all the money CARA had envisioned spending on this project, leaving nothing for doing anything with the park or the riverfront path.

Last Wednesday, the city council agreed to be “flexible” on the plan for the street alone. Translated, that means the council likely will not object if the CARA advisory board — meaning the council and seven others — decides to cut back the street project to just the four blocks from Washington to the Ellsworth Street Bridge (barely visible through the smoke in the photo above). That’s the area that’s been proposed for the plaza street treatment.

The CARA board will meet Wednesday to consider this. (If you have an opinion about it and want the board to hear it, you can register it ahead of the virtual, online meeting. Look up the agenda on the city’s website on how to do that.)

The CARA urban renewal program has about $20 million of spending authority left. Economic Development Manager Seth Sherry reminded the council last week that the riverfront redevelopment has been assumed to cost around $15 million. And he said redoing the entire street according to a design the council adopted in 2008 would probably take all of that.  Hence the need to cut the street project back.

Another option, presumably, would be to say: What’s wrong with Monteith Riverpark that demands to be improved? And as for the Clark Path, how about clearing it of vagrants, fixing the pavement, and otherwise leaving it alone? Wouldn’t that leave enough money to turn all of Water into a street that is properly improved so that private and taxpaying redevelopment might occur along its length? (hh)


11 responses to “Water Ave.: A future ‘plaza street’ in the smoke”