Water and Hill: What’s going on 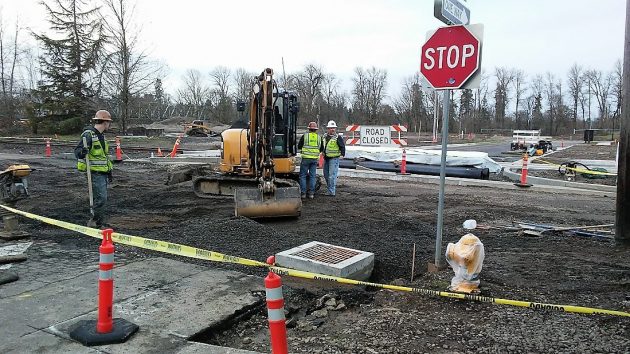 At Water and Hill, the intersection was closed to traffic while work continued on Jan. 12.

On the Albany riverfront, the intersection of Water Avenue and Hill Street has been torn up for weeks. It’s being rebuilt to make it look like the corner of Water and Jackson Street five blocks to the west, and you may wonder what’s behind this and why.

The main reason is that this was chosen as the main route in and out of the Edgewater Village development between Water Avenue and the riverside Dave Clark Path. The other reason is a Water Avenue “streetscape” plan developed by Portland consultants in 2007 and adopted by the city council in March 2008.

ODOT-Rail insisted on full crossing protection there even though there’s only one freight train a day on the Water Avenue rail line and street traffic is light. The crossing gates need extra space, and this required the width of Water Avenue to be sharply reduced. There will be just enough room for two vehicles to pass each other.

The 2008 streetscape plan for Water calls for decorative concrete paving stones at some intersections, and these pavers will be installed here. The plan, by the way, covers 14 blocks of Water from Washington to Main Street. Ten years ago it was estimated to cost $8.7 million, but nobody at the time knew who would pay if the plan was ever carried out.

At Hill and Water, the reconstruction is being paid for by the developer of Edgewater Village, the 58-lot housing complex encouraged by CARA, the downtown urban renewal district. The work is being done by BRX, the Millersburg construction company that also installed utilities and streets within the development.

Next to this intersection there is nearly an acre of vacant land owned by Albany since 2013, when the city sought and received the property from the BNSF railroad in franchise negotiations. Even after the intersection is reopened, because of the way Hill Street has now been built, the land will no longer be accessible for parking, for which it had been used for years. But because of city ownership of this parcel, CARA is paying $315,600 in urban renewal money toward the developer’s $1.7 million cost of putting in Edgewater streets.

The other day I asked Mayor Sharon Konopa what should be done with the city-owned land. “I personally feel we need some public parking in order to support the activity in this area, whether all of the property or a portion,” she said by email. “I would prefer to have a neighborhood meeting to gather ideas first and then the (city council) can evaluate options before any decisions are made.”

For the last five years the council has shown no interest in any use of this parcel it took off the tax rolls. Whether that will change, we’ll see once those decorative pavers have been laid down at Water and Hill. (hh) 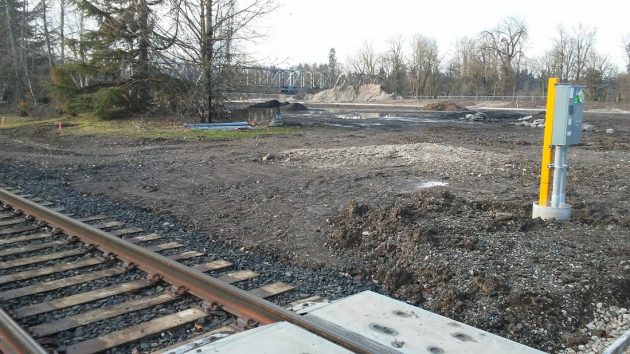 The city-owned lot north of the railroad tracks and west of the new part of Hill Street.


2 responses to “Water and Hill: What’s going on”