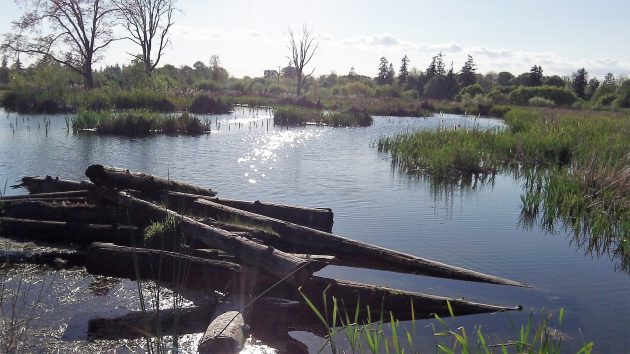 One of the ponds at the Talking Water Gardens in June 2015.

Albany and Millersburg completed their new wastewater treatment plant on the Willamette River in 2009 at a cost of around $70 million borrowed from the state. Three years later, for about $14 million, they finished the Talking Water Gardens. Neither project has worked entirely as planned, and now the cities may go to court over millions of dollars.

Albany announced Friday that at an executive session Thursday night, the two city councils authorized a lawsuit against CH2M Hill, the engineering firm that designed both the treatment plant and the Water Gardens, a series of ponds and channels intended to cool treated wastewater before its discharge to the Willamette River.

Kerry Shepherd with the Portland firm of Markowitz Herbold is handling the litigation. He’s the same lawyer whose firm years ago helped Albany obtain a $20 million settlement with Pepsi over failing to build a Gatorade factory in town. Later, Shepherd got Albany a $4.75 million settlement with the Siemens company, makers of a component of the wastewater treatment plant that was supposed to process solid waste.

In an email, Shepherd said: “CH2M has been a trusted partner of our communities for many years, and has been the lead engineering firm on our most important public works projects. We are disappointed with these projects, which we believe are suffering from fundamental engineering design flaws.”

If and when the authorized action is filed, in Linn County Circuit Court, it will state claims of more than $50 million, according to Shepherd. But he added: “While it is time to place these matters into our judicial system, we will continue to be open to speaking with CH2M Hill to resolve these problems amicably, if possible.”

The problem at the treatment plant is that a system named “Cannibal” was supposed to process waste so the residue could be applied to farm fields. Instead, the city has had to take the odorous stuff to the Coffin Butte landfill at the cost of hundreds of thousands per year. (The city also paid CH2M Hill $80,000 for its help in reaching the multimillion-dollar settlement with Siemens.)

The Talking Water Gardens are supposed to cool treated wastewater from about 72 to 68 degrees in line with requirements intended to protect Willamette River fish runs as decreed by the state Department of Environmental Quality. But the last I heard, the ponds never reached the amount of plant coverage needed to make that happen. City officials blame the nature of the pond bottoms.

The cities also say the Water Gardens have been leaking more water into the ground than expected, and they fear this might be regarded as an unlicensed discharge that could subject the city to costly enforcement action. (This even though the water is treated and would be permitted to flow directly into the river if the Water Gardens weren’t there.)

In the spring of 2014, some $3.8 million remained of the Siemens settlement to deal with the Cannibal issue. As I reported at the time, then-Public Works Director Mark Shepard told me that after the settlement, the city worked with CH2M to come up with a solution. “The cost estimates CH2M came back with were in excess of $10 million.”

Judging from the discussions at closed-to-the-public executive sessions over the years, nobody seems to know whether or how the problems at the treatment plant and the Talking Water Gardens can be fixed. But now that the issues have broken into the open with Friday’s announcement, we’re obviously talking a lot of cash. (hh)