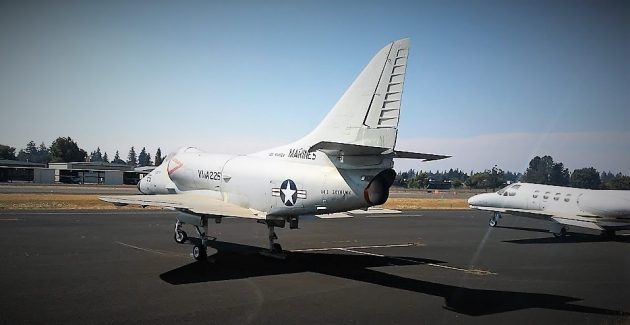 The restored shell of an A-4E Skyhawk sits on the east side of the Albany airport on Aug. 19.

Riding past the Albany airport the other day, I wondered about the status of the project to restore and display three vintage warplanes. Turns out that one-third of this volunteer effort may be completed this year, but there’s uncertainty about the rest.

I’ve reported on this several times going back to 2007, when the late Dick Ebbert, a Marine Corps pilot during the Vietnam War and then the city of Albany’s economic development director, briefed the city council on the idea of obtaining three surplus A-4 Skyhawks from a government boneyard in Arizona and mounting them in a static display at the city airport.

The government agreed to lend the surplus planes to the state of Oregon for a $10,000 fee. Local pilots and aviation buffs came up with the money and trucked the planes, stripped of engines and avionics, to Albany. And volunteers worked on their restoration since.

Last Sunday, I spotted one of the jets on the far side of the airport, then got a photo of it (above) through the fence from the grounds of the Linn County Expo Center. It looked pretty well complete.

From Jon Goldman, who supervises the airport as the city’s transportation manager, I learned that this plane is waiting for paint. “We’re trying to find a painter who can do the job for a reasonable price.”

A concrete slab on which the plane is to be displayed has been built at the airport entrance at Knox Butte Road and Aviation Way.

As for the other two, Goldman says they “are currently in different stages. We’re working with the Airport Advisory Commission on what the future of these two jets will be.”

The Douglas A-4 Skyhawk, I learned from Wikipedia, was developed for the Navy in the 1950s, and 2,960 planes of the type were built. Production stopped in 1979, but some are still in service at air forces around the world.

As I understand it, the volunteers in Albany may not proceed with the other two because getting the first one to this stage has been much more work and expense than anyone had anticipated. But the first one may be put on its slab, and painted in place, possibly as soon as this fall. (hh)