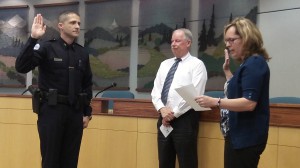 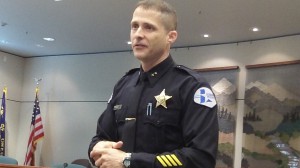 Albany’s new chief of police got quite a welcome on Friday. The council chamber at City Hall was filled nearly to capacity as Mario Lattanzio, 47, took the oath of office administered by City Clerk Mary Dibble. The job will pay him roughly $137,000 a year.

The Lattanzios have bought a house off Crocker Lane in North Albany. Members of his family including his wife, Kimm, were on hand for Friday’s ceremony.

Among the speakers praising Lattanzio for numerous qualities were Frank Milstead, the police chief of Mesa, Ariz., where Lattanzio spent his entire police career and most recently served as assistant chief. Also traveling a distance for the occasion was Vicki Myers, a friend and former police colleague of Lattanzio’s who now heads the police departments in Seaside and Pacific Grove, two cities in Monterey County, Calif.

One of the factors that drew Lattanzio to Oregon is that he has family in the region. One of them is his aunt Ellen Devlin, a 1976 graduate of West Albany High School who competed for the University of Oregon as a distance runner before working for Nike for 30 years and now lives in Portland. She, too, took to the podium to say nice things about her nephew.

Law enforcement and others in local government were well represented at Friday’s occasion, but members of the public also used the occasion to shake the chief’s hand. On Monday Lattanzio will start work, taking over from Jeff Hinrichs, who has been acting chief for about a month since the retirement of Chief Ed Boyd.