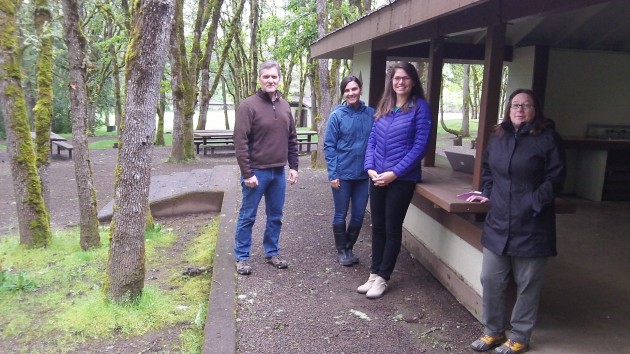 Benton County is starting to gather ideas about North Albany County Park, which is about to get a 10.7-acre addition in the form of a heavily wooded natural area. They plan to reach out to the public in various ways and invite comments on how the park is used, what if any changes people might want, and how it could be improved for the public’s benefit.

This county park of more than 20 acres features a handsome shelter with sinks and such, plenty of picnic tables, and vast expanses of meadows surrounding groves of oaks and other trees. Now the county is about to take ownership of the wooded parcel northeast of the park, at the corner of Valley View Drive and Crocker Lane. Myles Breadner, developer of a subdivision along Crocker, donated the wooded tract to Benton County as part of a complicated deal regarding street improvements.

The county intends to connect its new holding with the park via a trail that will go partially through the subdivision. Then the idea is to loop a walking path through the wooded section, possibly take out some hazard trees but otherwise leave the area natural. Benton County has applied for a state grant of upwards of $40,000 to cover building the trail, probably next year.

Meantime, county staffers have begun talking with “stakeholders” about the future of the park itself. A stakeholder is anybody who has an interest in this tranquil place, with its stately trees, open meadows, simple playground and shaded parking lot. At the park on Wednesday I chatted with four of them: Parks Director Jeff Powers, Parks Operations Coordinator Lisa de Graaf, parks intern Rachael Davee, and Sara Hartstein, a policy specialist with Benton County Health Services.

As far as I’m concerned, this park needs no enhancements. If I were a boy living in one of the nearby subdivisions, this would be the perfect place for adventures or games after school. But from the standpoint of park professionals, a few things might have to be done. Accessibility as required by the Americans with Disabilities Act is not as easy as it probably should be. And the county folks are thinking of providing more entrances from adjacent subdivisions. The idea, in line with promoting public health, is to make it easier and even more inviting to use the park for recreation or just walking around.

Benton County Natural Areas and Parks will provide plenty of opportunity for public input and comments. If you can’t wait and want to tell them what you think, you can reach the office at (541) 766-6871. (hh) 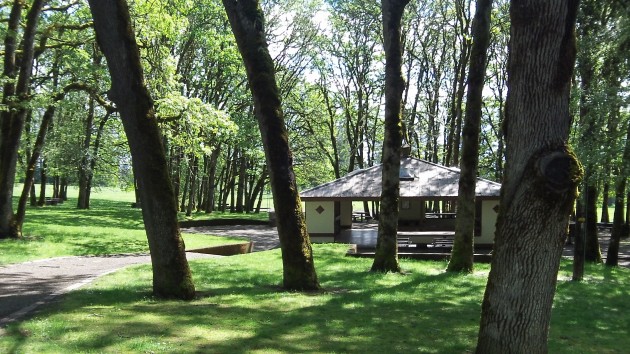 On a sunny day in spring, the area near the North Albany County Park shelter.