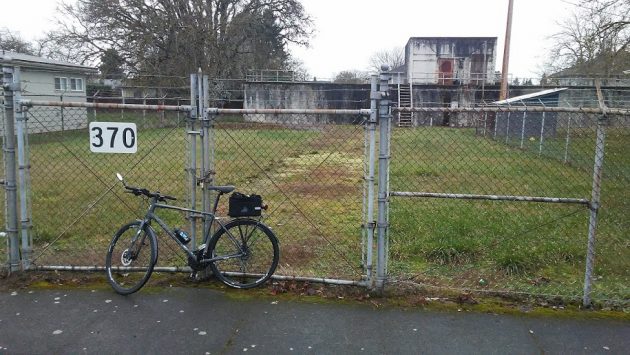 The property looked like this from the street on Thursday afternoon.

If you’ve ever wanted to own a seemingly useless but indestructible concrete structure, now’s your chance. The city of Albany will offer its surplus property at 370 Burkhart Street for sale.

The city council voted 6-0 on Wednesday to put the lot and concrete building on the market. Selling city-owned real estate requires a public hearing, and no doubt one will be scheduled when and if the council gets any offers for this lot.

Twice before the site has been the subject of stories on this blog. In August 2015, a couple out for a walk wondered about the structure that looked like a concrete bunker. And in June 2019, the site was mentioned in a city report as a possible location for affordable housing. The idea was dropped when the city got an estimate that demolition would cost $450,000.

The structure is a long-abandoned reservoir in the Albany water system and was built around 1963. The city acquired ownership when it bought the water system from Pacific Power & Light in 1985.

The reservoir walls, of reinforced concrete 18 inches thick, are 20 feet high, 10 feet below ground level and 10 above. Interior walls divide the space into eight chambers. It was disconnected from the water system many years ago — nobody seems to know when. Now there’s said to be water just covering the floor.

The Linn County tax office shows the lot as being 14,486 square feet, or about one-third of an acre. The county lists its market value as $68,540.

The city council got a briefing about the property in an executive session closed to the public on Wednesday night, then returned to open session to vote on offering it for sale. (hh)


6 responses to “Want to buy a surplus concrete ‘bunker’?”