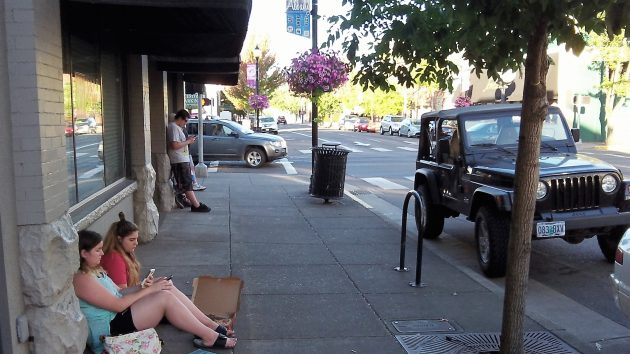 Staring at your phone and waiting for something to happen: Looks like fun?

Something was going on in downtown Albany Tuesday night. Dozens of people converged on the corner of Ellsworth and First, staring at their phones. I figured it had something to do with Pokémon Go.

Sure enough, it did. I had to ask one of the players, and he was kind enough to explain to an old guy how it worked. Sad to say, the old guy didn’t get most of it. The gist seemed to be that Tuesday night in this “augmented reality” game there was something significant about that particular street corner — he showed it to me on the map on his phone. And that’s what all these people were waiting for.

Well, I hope they got what they were hoping to find. But I don’t mind admitting having doubts about a game that has seemingly sane young people mesmerized enough to make them congregate at the command of an unseen game designer far away. Seems to me that a technology so psychologically powerful had better not fall into the wrong hands. And if it does, what could anybody do about it?

On the other hand, those people looking at their screens did not act like zombies. Some were laughing, others talking to each other. Clearly they were having a good time.

This was on a balmy evening half an hour or so before sunset, with summer all around us. Wonder if the game will still have the same outdoor appeal six months from now, on a dark night with the threat of freezing rain. (hh) 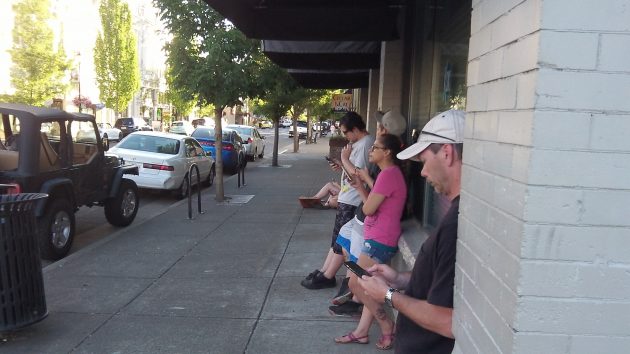 
4 responses to “Waiting for ‘augmented reality’”