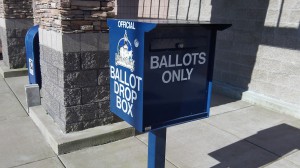 In Oregon, if you’re too cheap or too poor to buy a stamp and mail your ballot, you can drop it at a box like this. Long lines at polling places would be a thing of the past if other states copied the Oregon election system.

President Obama says he’s concerned that some citizens had to wait a long time to vote in the last election. If that’s a problem anywhere, it’s a local problem that can easily be solved without the federal government getting involved, isn’t it?

During the State of the Union address, Obama cited the case of an old lady from Florida, who apparently had to wait hours to cast her ballot because of long lines at her polling place. While the president spoke, she appeared on our TV screens, sitting in the audience. She’s 102 years old, and from the looks of her, it ‘s not that easy for her to get around. So why did she have to wait at a polling station at all? Why didn’t she vote by absentee ballot? Increasingly, that’s the way a lot of Americans vote in states where polling places still exist. In metro areas with lots of voters, that’s the easiest way to avoid delays.

Or states could do what Oregon has done. For years now we’ve been voting almost exclusively through the mail. There is no such thing as having to wait. And nobody is denied the right to vote because of delays. For the president and Democrats in Congress, though, that apparently would be too simple and inexpensive a solution. Instead, they’re pushing for several law changes to increase the number of voters, such as automatically registering people at government agencies, which means signing up more people getting government help.

They also want to allow voter registration up through election day. And they’d like to ban ads that might be construed to discourage voting. It’s hard to think how an ad could do that, but banning ads of any kind goes right along with other current attempts to infringe on the rights guaranteed in the Constitution.

The fact is that in America, nobody who wants to vote is denied the opportunity to do so. What more does anyone want? (hh)