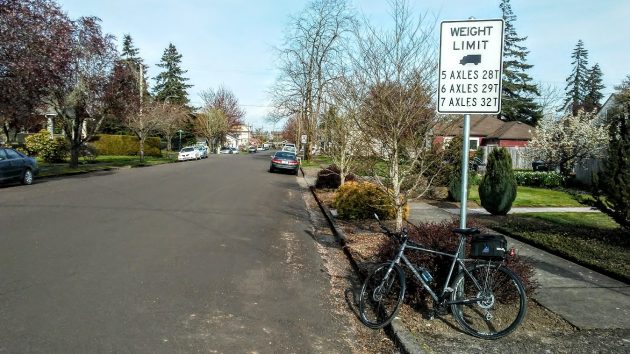 New weight limits for the Santiam Canal bridge on 10th Avenue are shown on signs, like this one a block ahead of the bridge.

With all the talk about America’s supposedly crumbling “infrastructure,” it might be worth noting that inspections have found two 90-year-old bridges on Albany’s Santiam Canal to be in fine shape.

In line with recommendations from ODOT, the city has just posted new weight limits on the canal crossings on Fourth and Tenth avenues, but not because there’s anything wrong with the structures.

ODOT inspected both bridges in 2019. It found the condition of the bridge on Fourth to be “good,” and the one on Tenth to be “satisfactory.” Why the difference? No explanation given.

In letters to the city last month, the state agency recommended the weight restrictions because in both cases, “reinforcing details can’t be found for the bridge, preventing ODOT from calculating the load capacity for the structure.”

But because the bridges have a history of service and show no signs of stress, ODOT considers them safe for traditionally legal loads.

Both crossings were built in 1930, and both are single-span concrete slabs. The bridge on Fourth is 22.4 feet long, and the one on Tenth 25..

Ron Irish, the city’s transportation systems analyst, does not expect the weight limits — starting with 29 tons for five-axle trucks on Fourth and 28 tons on Tenth — to have a significant effect on traffic.

Similar weight restrictions have been in effect for some time on the canal bridges on Seventh and Ninth avenues, on the Third Avenue Bridge across the Calapooia, on Waverly Drive at Cox Creek, on 53rd Avenue at Oak Creek, and on Bain Street at Swan Lake.

According to a table sent out by City Manager Peter Troedsson, the average fire truck weighs 19-30 tons, a loaded cement truck 33 tons, a loaded dump truck 36 tons, and a loaded tractor-trailer 40 tons. These are the kind of rigs that presumably should avoid these crossings.

On Lochner Road across Oak Creek, the weight limit is much lower. Any truck with five axles or more can’t weigh more than 8 tons. (hh)


4 responses to “Verdict on two canal bridges: In OK shape”