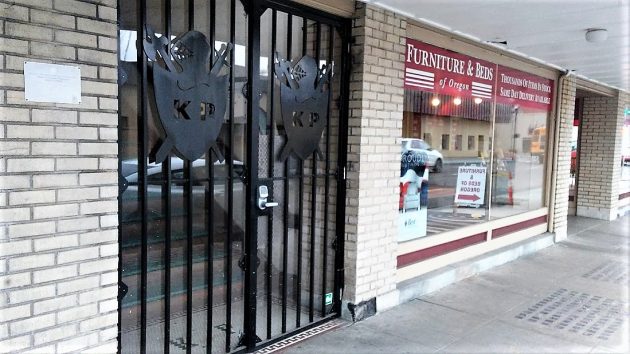 The new security doors at the Knights of Pythias Building on Lyon Street downtown.

The security gate at 230 Lyon St. downtown was installed to keep trespassers out, and now the building owner is asking the city council for permission to let the doors swing out. Here we have a reminder of two things Albany has plenty of — vagrancy and rules.

The city council is dealing with part of this at a work session on Monday. The agenda includes a request by Daren Clowser, owner of the former Knights of Pythias Lodge Hall at Lyon Street and Third Avenue, for a “license to occupy public right of way.” This is to accommodate the doors he had installed at the foot of the stairway to the residential top floor.

Because of the geometry of the entrance, the doors could not be made to swing inward. So they extend on to the sidewalk when somebody walks in or out. The sidewalk is 12 feet wide, leaving plenty of room for people to pass the open doors.

“I installed the doors because of the ongoing problems with the transient population,” Clowser wrote to the city. “I have 14 apartments upstairs and was constantly getting complaints from tenants of transients sleeping in the hallways and stairways. The police would remove the person(s) but that did nothing to deter them.”

The result was damage including graffiti and even human waste. “It got to the point that the female tenants were scared at night to walk the hallways alone,” Clowser wrote.

Another reason, besides the layout of the entrance, for the doors to swing outward: “Because of fire code.”

A year ago, Clowser got a $10,000 grant under Albany’s downtown storefront restoration program, and the building got a facelift last summer. Now, the license to occupy the sidewalk with his doors is not the only thing he’ll need, according to the paperwork before the council. He’ll also still need a building permit and “land use approval.”

Land use? Yes, changes on the outside of the former lodge, built in 1913, are subject to applying for “historic review” and getting the city’s OK.

But whether it’s in keeping with history or not, the building owner clearly had no choice but put in doors with a security lock in order to keep vagrants out. (hh)

UPDATE: The city council voted 6-0 on Monday to approve the “license to occupy” that the owner needed.