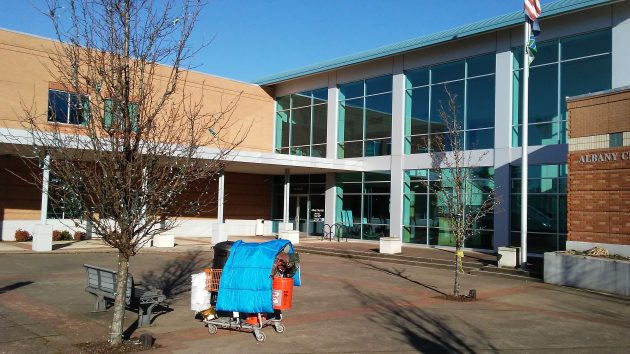 In January 2017, a man parked his belongings outside City Hall while he went upstairs for some rest.

A proposed crackdown on crime and other problems associated with vagrancy in Albany turned into a public debate before the Albany City Council Wednesday about what to do — and not to do — about the homeless.

The upshot: The council postponed until March 28 final action on four new city laws proposed by the police department, including a citywide camping ban on public property, and an exclusion zone from which the city court could banish for up to a year people convicted of three offenses within the zone. The zone would measure nine-tenths of a square mile and cover the central part of town from Elm to Pine Street and from the Willamette River to Pacific Boulevard, Albany Station, and 11th Avenue.

Property owners and residents along the riverfront urged the council to pass the proposals. They told stories of having to deal with troublemakers and cleaning up after them. The speakers had spent money and effort upgrading their properties and surroundings, and they worried about the downgrading effects of vagrancy, such as trash, noise, drug use, and generally bad behavior including fights.

Arguing against the measures were a group of social-justice warriors who urged the council to consider that the homeless were, foremost, human beings. Sure, they cause some trouble, but most of them can’t help themselves. An exclusion zone might keep them from getting to the church-run soup kitchens downtown where they get their meals.

Council rules require unanimous consent for passing ordinances at one meeting, and motions to pass the camping ban and exclusion  zone failed on that score. They will come again at the council’s next regular meeting. Ordinances dealing with parking violations and abandoned vehicles got the same treatment and also will come up again on March  28.

The council did enact an ordinance spelling out how abandoned and vacant houses have to be secured in order to keep them from becoming drug dens and squatters’ lairs.

Pretty much lost in the discussion was that the exclusion zone — the police call it an “enhanced law enforcement area” modeled after an ordinance adopted in Ashland — is targeted not at the homeless generally but at people who have been convicted of three offenses within the zone over a period of six months. And the camping ban was prompted by the amount of refuse, and sometimes human waste, that is typically left behind at the more popular camping spots.

Anybody who doubts that steps have to be taken should google “homeless in Orange County” and look at the videos that come up. (hh)