Use those dual lanes while you can 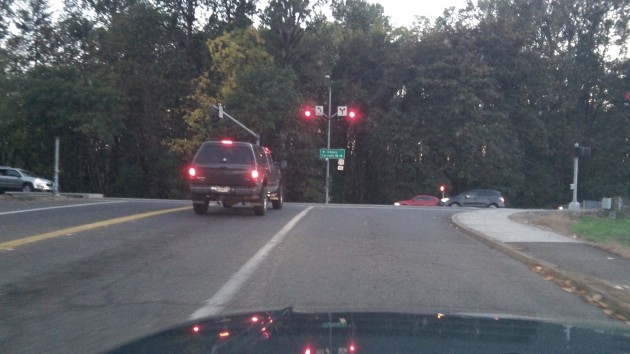 Second turn lane still beckons at Spring Hill and 20, but not for long.

Better enjoy it while you can, North Albany drivers, pulling into this extra left-turn lane on Spring Hill Drive at Highway 20. This little traffic feature has been a boon to drivers, but that doesn’t count as much as ODOT regulations and concerns.

Albany officials would like to keep the dual lanes, installed as temporary measures last spring for the North Albany Road project because they would ease drive-time congestion on Spring Hill. But the city says ODOT won’t allow making the arrangemet permanent without further studies and possibly expensive signal upgrades. ODOT is worried about trucks turning on the banked highway and tipping on any cars to their right. So this week, the city council reluctantly voted 4-2 to go back to the one-lane pattern, with Dick Olsen and Rich Kellum voting no.

Farther north on Spring Hill, the temporary traffic oval at Quarry Road will come out too after both the council (on Monday) and the Benton County Board of Commissioners (on Wednesday) agreed with a staff recommendation that a permanent roundabout of the proper size is not feasible there. Benton public works chief Josh Wheeler says the county will study the intersection to see about other ways of slowing Spring Hill traffic, as the city council had asked.

The council also urged ODOT to look at upgrading the Spring Hill/Highway 20 intersection — designed in the early 1970s when the Lyon Street Bridge was built — to allow dual left-turn lanes on Spring Hill to be put back in.

Meanwhile, the city’s North Albany Road contractor has until Dec. 8 to complete the contract, which includes the work at both of the Spring Hill intersections. So you may have a little time left, but not much, to enjoy the ease of two lanes at the turn into town. (hh)


9 responses to “Use those dual lanes while you can”