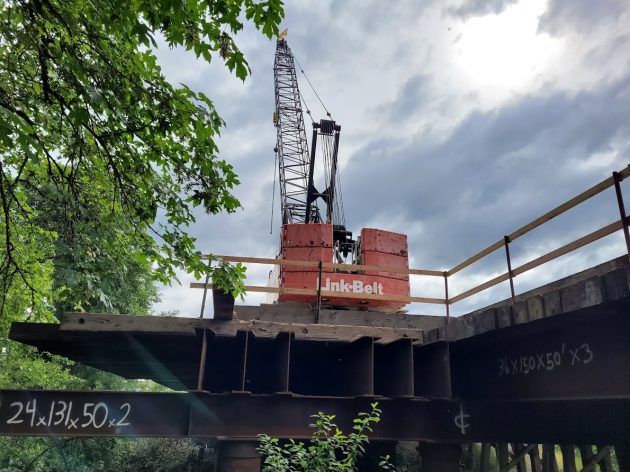 The crane looks ready for work Thursday on the project to replace UP’s bridge across Cox Creek.

In case you haven’t had enough yet of this Cox Creek railroad project, here’s more. Today I heard from Aaron Hunt, senior director of public affairs for the Union Pacific in Portland.

Here’s what he told me via email:

“We are replacing the bridge in Albany as part of our regular maintenance schedule for wood trestles of that kind. Our bridge team works daily to inspect and maintain our bridges here in Oregon and across the rail network.”

I had wondered about what replacing the timber trestle on Cox Creek was costing.

“We are investing $2.2 million in the project,” Hunt said. “The UP rail line in Albany is a key part of the Union Pacific franchise and serves dozens and dozens of our Oregon customers and Amtrak passengers.”

Over the last couple of weeks the railroad built a sturdy but temporary platform next to the trestle so a crane could be brought in. Now the platform is finished and the crane is in place.

Earlier, one of the men working on the project told me the job should take about a month and a half.

If you want to learn more about the Union Pacific and its railroad bridges, there’s website you can check.

The work on Cox Creek so far seemingly has not displaced the apparently homeless guy who has camped on the creek just upstream of the trestle. The camp and the debris field with it are still there. And on Thursday afternoon, so was the man living there. (hh) 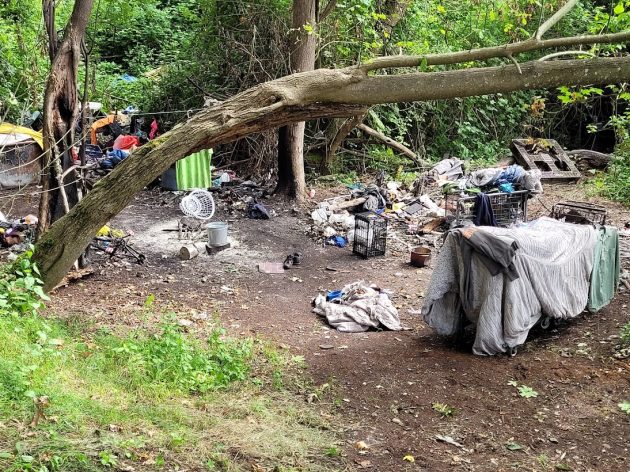 The homeless camp upstream of the Union Pacific bridge across Cox Creek on Wednesday, June 15.