The woman who lived in this Albany house most of her life will be remembered when the place is rebuilt and named in her honor.

The 115-year-old house at 1405 Front Ave. N.E., in the Willamette Neighborhood, is on one of my bike routes. On Feb. 2, I reported that it was about to undergo a renovation. Click the video for a glimpse at a drawing for the finished work as envisioned by Superior Carpentry and Homebuilding. Sean Sullivan, the firm’s general contractor, and his foreman, J.D. Harris, showed it to me when I stopped by on yet another ride Friday afternoon.

They expect to get construction drawings from their architect next week so they can take out a building permit.

The foundation under the front section of the old house will have to be rebuilt, but the internal “bones” of the place are sound and strong, and an inspection found no mold in the wood, Sullivan told me.

A one-story section in the back of the house is where the ailing owner lived the last few years. A sign still on the door warns visitors that inside there’s “oxygen in use.”  That section of the structure will be rebuilt and expanded as a two-car garage.

Once the restoration and reconstruction starts in earnest  — Sullivan called it a “rescue” when I talked to him before — the job should be complete in about three months.

The house had been owned by Lola Skelton, who had lived there starting in the 1930s and who died last year. In recognition of Mrs. Skelton’s fondness for roses and her standing in the neighborhood, Sullivan says he’ll call the finished house “Lola Rose.” (hh) 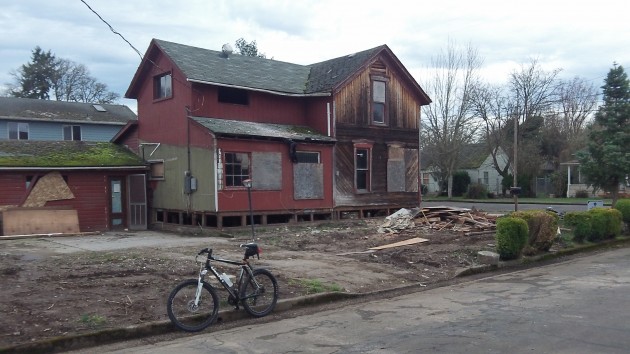 The one-story wing on the left will be replaced by a two-car garage.