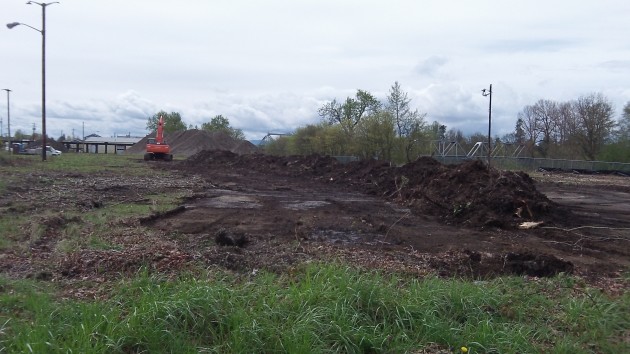 Looking west from Main Street: Dirt has been moved.

On Tuesday there were the first signs of actual construction at Edgewater Village, the riverside residential development in which the city of Albany has invested $2.4 million of urban renewal money. As you can see, a backhoe operator had been busy moving some dirt, apparently in preparation for installing utilities. A pile of pipes was stored on the site.

The property of nearly 6 acres between the Willamette River and Water Avenue was cleared of brush and accumulated trash in February. At the time, the city announced it expected construction to start in March. The developers almost made it, starting on April 1 instead.

The project began when CARA, the central Albany urban renewal district, approved $2.4 million in support for what at the time was contemplated as a collection of 146 townhouses or condos. (The aid included $900,000 the city had paid to demolish the ruins of the former Inland Quick Freeze packing plant, which had closed some years before and later burned down.)

The plans changed several times over the years until the city planning commission in 2013 approved a site plan calling for 58 single-family lots. Last month, though, the announcement on the occasion the site being cleared spoke of 60 units.

The first five houses are to be built on the eastern edge of the site, facing Main Street, and are to completed this fall. The development company, Edgewater Village LLC, is based in Lake Oswego. A dump truck from Canby Excavating was on the site Tuesday. (hh)


One response to “Update on Edgewater Village”