Up for yet another train-watching episode? 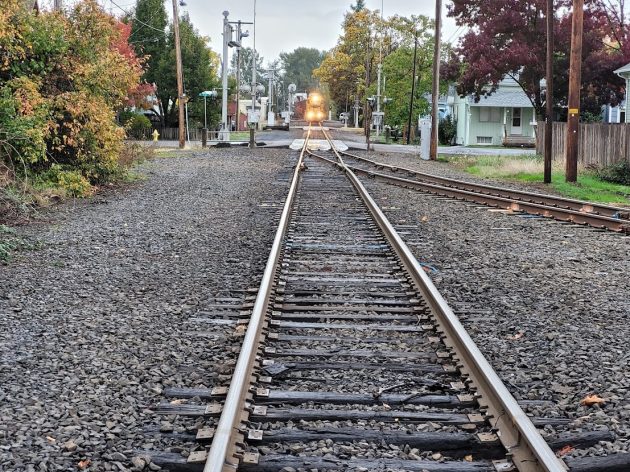 Seen from Fifth Avenue, a Portland & Western freight heads toward us from Second on Oct. 22.

You’d think that sooner or later, I’d get tired of watching trains go by. But as you can see, that day has not yet come.

Here’s the afternoon Portland & Western freight from the direction of Corvallis on Friday after it has crossed the Willamette River and is heading for the Albany yard.

As happens most days, the engineer halted the train before reaching Second Avenue, with most of the cars stopped on the bridge across the Willamettte.  The train has to wait until the engineer gets clearance to enter the yard.

The last time I checked on this, some years back, the clearance had to come from the Union Pacific, because getting into the yard meant crossing the UP main line.

Years ago, these trains were much longer and the wait for clearance occasionally caused their tail ends to block Spring Hill Drive and North Albany Road on the other side of the river. To prevent this, the railroad built a new track leading toward the Millersburg yard.

But for a reason I don’t know, these trains from Corvallis still turn into the Albany yard instead of going to Millersburg. And so they wait on the bridge. (hh)


6 responses to “Up for yet another train-watching episode?”