Unsolved mystery: Book in the wall 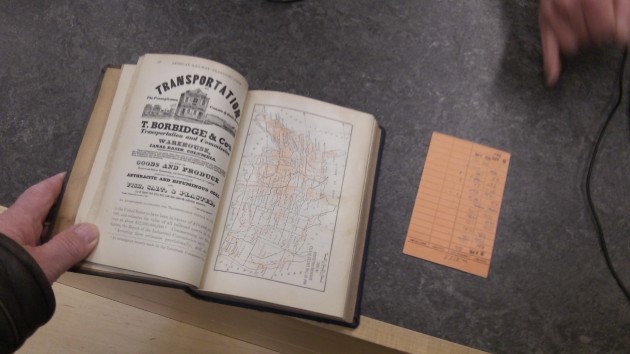 The book and the library card that was still in the back.

“American Railway Transportation” by Emory R. Johnson, Ph. D., was first published in 1903. Today’s mystery is this: How and why did a 1907 edition of this 434-page book end up hidden in the wall of a house at 1405 Front Ave. N.E. instead of being returned to the Albany Public Library when it was due in (I’m guessing here) 1935?

As I mentioned on this site on Feb. 2 and again on the 5th, the old house on Front dates from 1900 and is about to undergo restoration. Sean Sullivan of Superior Carpentry and Homebuilding, who is tackling the job, told me Monday that the book, in good condition, turned up in one of the walls as the sheathing came off. He surmised that houses in that east Albany neighborhood near the Willamette River might have been built for railroad families, and the book’s title and subject seemed to fit right in. The book had belonged to the Albany Public Library. That’s where Sullivan returned it and where I went to take a look.

The book had been borrowed by D.W. Lovett, according to the library card still stuck in its pocket inside the back cover. The “special privilege non-fiction card” identified its holder as someone who sometimes returned books in as little as two days. The card tracks the dates but not the years in which it was used. But on two lines it says “33.” If that indicated a year, then the intervening dates stamped on the card suggest that the book was checked out on April 24, 1935, and not returned.

The card pocket says borrowers will be charged 1 cent for every day a book is past due. At that rate, the fine on this one would be about $295.

The library card says D.W. Lovett lived on E. Water Avenue, about a block from where the book on railway transportation ended up in a wall. He might have been — but I can’t be sure — the Dallas W. Lovett listed in the Albany Directory of 1955 as then living in the 600 block Montgomery Street. His occupation: Southern Pacific yardmaster.

What about the author? Emory R. Johnson was a professor of transportation and commerce at the University of Pennsylvania. But that’s not all. He also was a member of the Isthmian Canal Commission from 1899 to 1904. Construction of the Panama Canal would start the year his service on the commission ended.

In a chapter on passenger rail service, Professor Johnson observes: “The volume of travel in the future will be enlarged somewhat, as it has in the past, by increasing the speed of trains.” (It’s what the Oregon Passenger Rail project is hoping more than a century later.)

He also speculated about the future: “The possibilities of electricity are doubtless greater than those of steam, and the ultimate use of the electric motor in all branches of the transportation service seems a rational expectation.” He was writing about trains, but maybe his thoughts apply to motor cars as well. (hh)

This story has been edited to correct the book’s title. (hh)

8 responses to “Unsolved mystery: Book in the wall”