Unlike Carthage, this is still there 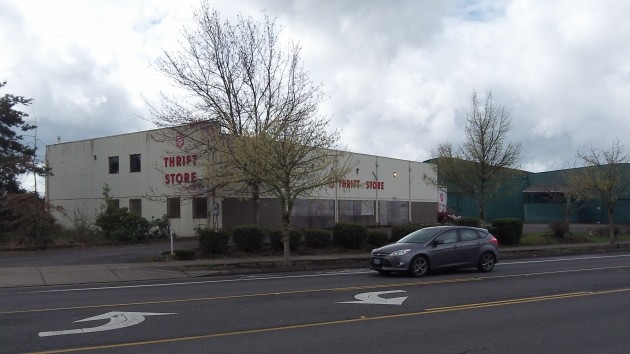 Stepping out of Yuly’s Bakery, this is what you see across the street.

Far be it from me to invite, by harping on old news, recollections of Cato the Elder. It was that Roman conservative, you may recall, who ended every public speech with the immortal phrase “Ceterum censeo Carthaginem esse delendam.” While Cato harped on the need to destroy Carthage if the Roman republic was to survive, I am returning to a far less momentous development, or non-development, of which I am reminded every time I emerge from Yuly’s Bakery in the Carriage House Plaza clutching a bag of Mexican pastries.

As I step from the bakery thinking of sugar and cinnamon, my eyes cannot help but fall on the old Salvation Army thrift store across the street, vacant and boarded up for at least the last six years. Seeing it there, I am reminded once again of the Albany City Council’s recent decision killing a chance to give the old building an upgrade and new use.

The Oregon Beverage Recycling Cooperative wanted to buy the property and turn it into a bottle and can redemption center without requiring a dime of urban renewal financing or other public aid. But Albany’s interpretation of the zoning code was that as a business with a potentially regional clientele, the redemption center was not allowed in that spot. And the council refused to approve a change in the code to allow it.

So the empty building sits there, still for sale, still empty, still unused, an invitation to urban decay.

After years of Cato’s haranguing, and not necessarily because of it, the Romans eventually did destroy their rival across the sea. That was in 146 B.C., by which time the repetitive orator had been dead for three years. It’s not perhaps a hopeful analogy, then, in terms of when this Albany monument to outmoded zoning concepts will finally find an appropriate use. (hh)


3 responses to “Unlike Carthage, this is still there”