Unlawful to get out of the rain?

Written May 9th, 2014 by Hasso Hering
Comments: one response. 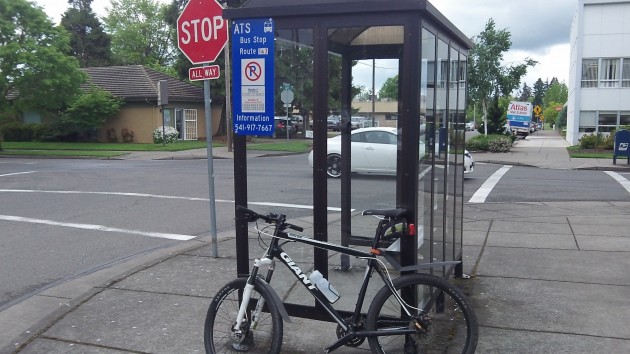 Something else likely to be illegal: Using bus shelter as bike stand.

It’s not exactly a constitutional crisis, but the Albany City Council may be about to make it unlawful to step under the roof of a bus shelter to get out of the rain. It’s hard to believe that is anybody’s intention. But what do you make of the draft of a city law on transit shelters that’s going before the council’s work session Monday and its regular meeting on Wednesday night?

Apparently the city has had trouble with what some people do in or near bus shelters and the train station. Maybe they camp there. Or they make a mess. Maybe they frighten away the regulars. Who knows? So the proposed ordinance has a section titled “improper use of transit shelter.”

“No person shall,” it says, “enter or remain upon, occupy or use a bus shelter for purposes other than boarding, disembarking or waiting for an approved city bus service.” So if you’re on foot, or on a  bike, and are caught in a downpour and step under the nearest bus shelter, that is clearly a purpose other than waiting for a bus. It would be unlawful, no?

The draft includes the same prohibitions covering Albany Station. Only “boarding, disembarking or waiting for transit service” is allowed. So what about entering the train depot not to board a train, and not after getting off a train, and not to wait for a bus or a taxi, but instead to pick someone up when the train arrives? Or to see someone off? Or just to check the timetable posted there? Or to take a photo of the handsome building? All those reasons for being at the station would be unlawful, according to the plain words of the draft.

Again, the city police would not hassle anyone waiting at the train station for his aunt from Los Angeles to arrive on the Coast Starllight. But if that’s not the intent, someone had better reword the draft before it becomes a city law. (hh)


One response to “Unlawful to get out of the rain?”