Unhoused in cars: Looking for a place to park 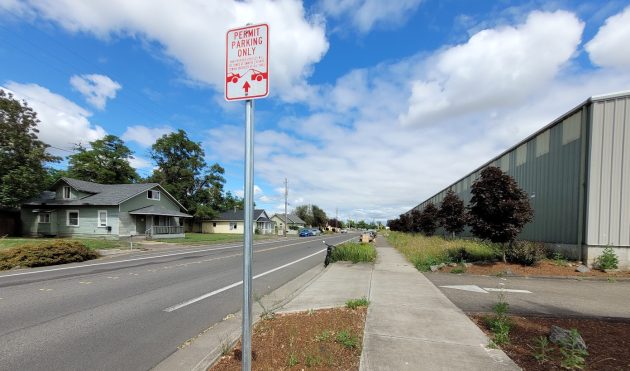 The sign tells people of the parking ban on this block of Ninth Avenue near the Helping Hands shelter.

People forced to camp in their cars because of homelessness are largely gone from the block of Ninth Avenue in Albany where the city has banned them. It’s not clear where they have gone, and an advocate’s plea for city council help regarding parking so far has generated no response.

In June the council, citing an “increased level of unlawful activity,” voted to ban parking without a permit on a block of Ninth Avenue east of Jackson Street, near the Helping Hands homeless shelter. The parking ban took effect July 8. A week later, signs to that effect had been posted, and most but not all of the vehicles that had been parked there were gone.

Last Wednesday, Carol Davies of the Creating Housing Coalition told the council of the plight of unhoused people living in their vehicles because the two local shelters were full. She asked for help in finding a place where they could park overnight.

On Saturday I asked her if she had received a response.

“Unfortunately, I haven’t,” she replied. “I’m working with a number of people who are living in their vehicles and all but one are elderly and/or disabled, and that person is a single mom living in her RV with her young children.”

As you would expect, the vehicles involved are not in good shape and prone to breaking down.

“With the high cost of gas, these people don’t have the resources to continually move their vehicles, and the police are telling them they’ll be ticketed for trespassing if they don’t. They can’t even go to the shelters because they’re full.”

Tonight (July 18) the Albany Planning Commission is expected to approve expansion of the Helping Hands shelter on Ninth Avenue.

The commission will act on vacating an unused section of street right-of-way adjacent to the shelter, and on a conditional use permit to allow the expansion.

The planned addition will allow the shelter to provide 30 so-called low-barrier beds. These are places for people who can’t be housed there now because they don’t meet requirements for mental health and a clean urine analysis.

At present, at full capacity the shelter can house 71 men and 34 women, but only if they meet those requirements.

As for safe overnight parking for people forced by circumstances to live in their cars, that need will likely remain. If there’s a suitable location in town — with facilities and within walking distance to a store — it has yet to be identified. If it ever is, perhaps the city could make it ready by spending all or part of the $1 million homeless grant it got from the state. (hh) 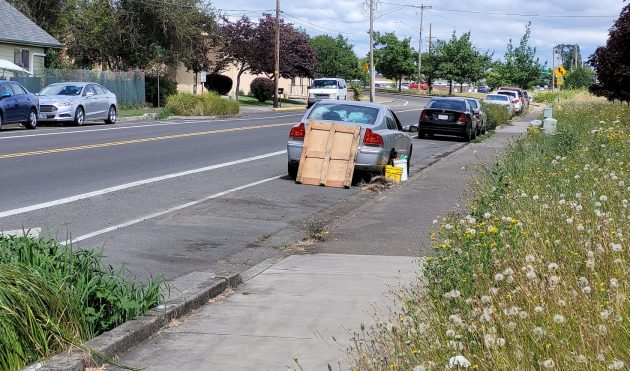 Only a few vehicles used for camping remained on this block of Ninth on July 16.


7 responses to “Unhoused in cars: Looking for a place to park”