‘Under review,’ a project at Waverly School – Hasso Hering

‘Under review,’ a project at Waverly School 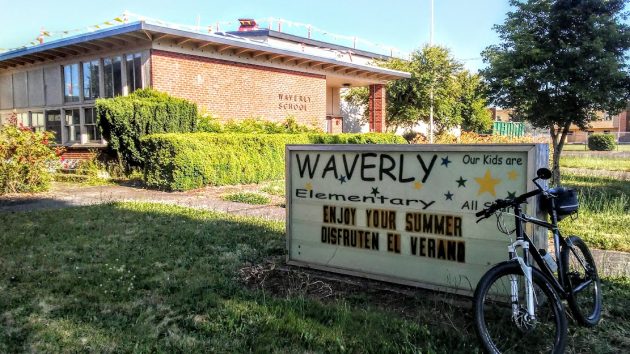 Waverly Elementary the way it looked on June 26. Roofing work was going on.

On a leisurely ride I went past Waverly School on Columbus Street this week because I had seen the school mentioned in the “planning projects under review” by the Albany Planning Division. So what’s being planned?

An expansion of the school, that’s what. But the decision to expand it has not been made.

On Tuesday Travis North, one of the planners at City Hall, posted a notice online. It said the planning division had received an application for a conditional use permit to place a modular building at Waverly School.

Owners within 300 feet were being notified and have until July 7 to submit written comments if they have any.

The modular building would hold three classrooms. It would be situated on the north side of the school facing Fourth Avenue S.E.

The school district also is proposing to expand, by six spaces, the parking lot on the west side off Columbus Street, where the front door is.

You can find a site plan of the proposed additions with the online notice on the city’s website here.

Whether Greater Albany Public Schools actually go through with this plan has not been decided, though.

“This is still in the concept phase, keeping open the option of moving the existing modular from Clover Ridge to Waverly,” Russ Allen told me by email. He’s the GAPS director of business and is listed as the applicant for the conditional use permit.

The project, he said, has not yet gone to the school board for review and approval. “It might be on the July agenda,” he added.

This would not be one of the projects in the districtwide expansion and repair program launched with the bond issue approved in 2017.

At Waverly now, you can see workers busy on the roof. Replacing or repairing the roof — now that is part of the many bond projects at Albany schools. (hh)

5 responses to “‘Under review,’ a project at Waverly School”