Two-way streets downtown? Forget about it! 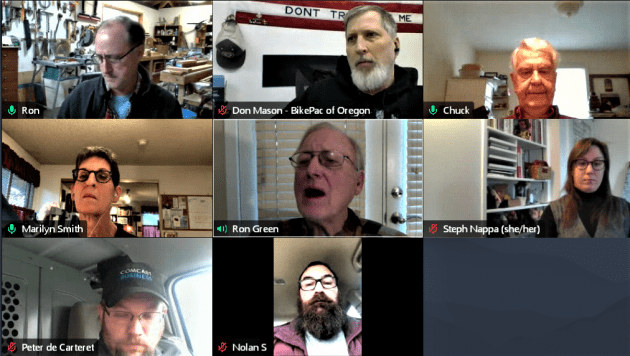 Turning First and Second avenues in downtown Albany into two-way streets is not in the cards, not now and probably never, judging by what the city’s Traffic Safety Commission heard this morning.

The commission, advisory to the city council, got a rundown of the pros and cons from Ron Irish, the traffic systems analyst in Albany Public Works. And it was mostly cons.

Two-way traffic on First and Second would require signal changes and new traffic movements at the intersections of Ellsworth and Lyon streets, the downtown couplet of Highway 20. This would drop the traffic-carrying capacity of those points 30 or 40 percent, leading to longer tie-ups on the highway and the side streets.

Incoming traffic on Highway 20 backing up to Hyak Park would become normal, Irish said. ODOT would have to give its approval, and given the effect on congestion, that’s not going to happen.

Further, rebuilding the four signals, plus the two on Third, and making other changes required for two-way traffic would cost not less than $4-5 million, according to Irish’s estimate.

Bike lanes on First and Second would have to disappear with two-way traffic. And trucks could no longer double-park to make deliveries, as they can now.

Commission member Steph Nappa had brought up the two-way idea as an item for future consideration at the last meeting in December, and Chairman Ron Green was sympathetic. Two-way streets are considered more friendly to pedestrians and are thought to help downtown areas become more vibrant in towns where the conversion has been made.

Other commission members taking part in the discussion were Nolan Streitberger, Peter de Carteret, and Chuck Kratch.  Marilyn Smith, a new member of the city council, took part as an observer. So did Don Mason of BikePac of Oregon, an advocacy group for motorcyclists.

First and Second are two-way streets in photos from early in the 20th century. No one seems to know when the city changed them to one-way.

Gordon Steffensmeier of Albany Public Works told me aerial photos from 1963 show them as one-way.

Regardless of when it was established, barring some kind of upheaval it’s clear that the one-way pattern will stay in place for a good long time. (hh)

PS: This afternoon Ron Irish came up with a 1953 Albany traffic report by the Oregon State Highway Department that recommended one-way traffic on Ellsworth and Lyon as well as First and Second. It was presumably in response to that recommendation that the city council enacted the pattern we have today.


11 responses to “Two-way streets downtown? Forget about it!”