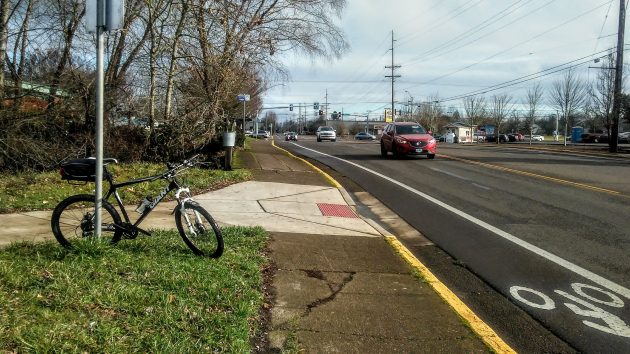 The Perwinkle Bikepath will be extended eastward from here, where it hits Queen Avenue, to Geary Street, where the signals are.

Albany has won grants totaling about $1.5 million intended to provide safer streets for children to get to and from two elementary schools on the south side of town.

The city council is set to accept the money when it meets Wednesday.

One of the projects, in the neighborhood of Sunrise Elementary, will extend the Periwinkle Bikepath for about one block east from there it dead-ends on the north side of Queen Avenue. The extension will create a multi-use path to Geary Street.

As part of the same project, “rectangular rapid flashing beacons” will be installed on Queen at Main and Thurston streets. People on foot wanting to cross Queen can activate the beacons, urging motor vehicles to stop and let them get across.

The other project , near Lafayette Elementary, calls for sidewalks to be built, in segments where there are no sidewalks now, on both sides of Geary Street between Grand Prairie and 34th Avenue. This will require some acquisition of right of way. (From looking at the street, it appears it may also mean cutting down a few big trees.)

Rapid crosswalk beacons will be added at 28th and 31st avenues.

In both cases, the city will use street system development funds to cover the difference between the grants and project costs.

Albany applied for the grants under the Safe Routes to School program administered by ODOT. As the name implies, the federal program is intended to improve conditions for school children who walk or bike to and from school. (hh) 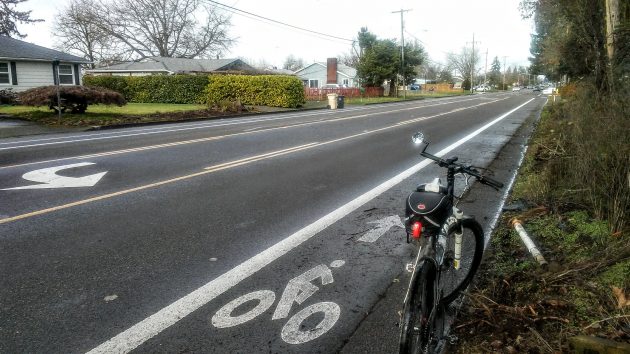 This section of Geary, south of 29th, is one of the segments that will get sidewalks by April 2023.