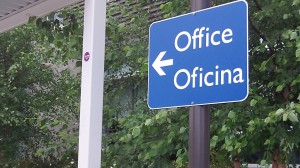 How helpful is that translation?

When I saw this sign at South Medford High School the other day, my first thought was that we ought to be giving Spanish speakers a little more credit. Do the people responsible for that sign really believe that students who grew up speaking Spanish can’t figure out what “office” means?

Of course they can, especially if they’re in high school and have been around for more than a week and half. The sign patronizes people. It implies they need the translation even though the word in English and Spanish are so close.

But maybe the translation is not really intended mainly to point the way to the office. Evidently it’s also intended to convey the message that this is an inclusive place where they recognize the diversity of the population. But promoting two languages is a troubling trend, which has been going on for years and now is well advanced. Even many big stores have their signs in both English and Spanish.

It’s troubling because it reflects not a country trying to maintain its unity but one risking a split into cultural factions denoted by separate languages. If you know anything about the history of separatist strife grounded in culture and  language differences — Quebec a generation ago, Catalonia now — you won’t think of a dual-language system as a good idea for the United States. (hh)

Steven Zielke responded on June 19:  Hasso, all sorts of folks need to visit a school office.  Not just students.

Rich Kellum responded on June 20:  If you make it easy for folks to get by without learning the language of the country they have moved to, they will continue to take the easy road… Hundreds of millions of people came to this country before them; we didn’t make excuses for them. Why do we seem to think so little of the latest group’s ability to learn?