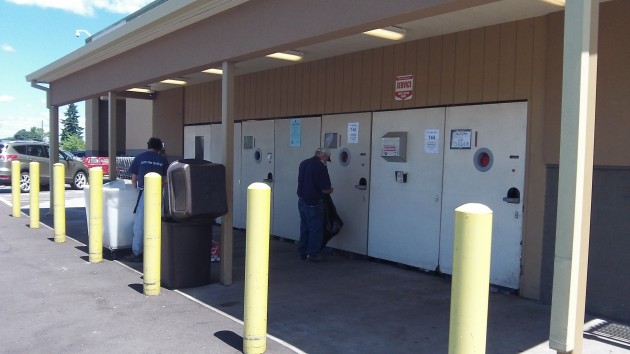 The redemption center will take the place of  machines like these at eight Albany retailers. (These are at Fred Meyer.)

Two more retailers have decided to participate in the Albany bottle and can redemption center being planned by the Oregon Beverage Recycling Cooperative, says Cherilyn Bertges, the Portland-based cooperative’s public relations and outreach manager.

“Safeway and Target will also be participants,” she wrote in an update she emailed today to a story that appeared here last week. “There was an amendment in the application request after it had been submitted. They both have OLCC signage at their stores now.” Six others were listed on the original application.

The legislature authorized central bottle and can redemption centers several years ago in order to make the 1971 Oregon Bottle Bill work better. The idea was to relieve retailers of the chore of handling empties, a task getting bigger because lawmakers added to the types of containers covered by Oregon’s first-in-the-nation deposit law.

When the Albany “BottleDrop” — the cooperative’s term for its redemption centers — opens, participating retailers plan to quit accepting empties. The others in Albany, besides Safeway and Target, are Fred Meyer, Bi-Mart, Costco, Mega Foods, Rite Aid, and Walmart.

As reported last week, the cooperative expects the Oregon Liquor Control Commission to approve the Albany center at 2141 Santiam Hwy. S.E. this month so that it can open by the end of August. The location, a former tool store, is across the highway from Fed Meyer and Bi-Mart and next door to the Los Dos Amigos restaurant. (hh)