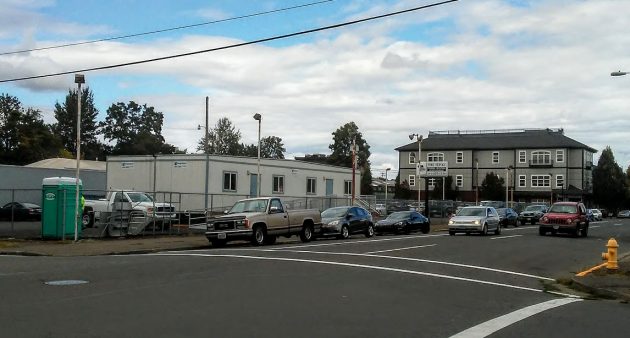 Washington Federal’s temporary branch is being set up at First and Baker.

One downtown Albany bank stands empty while another is setting up a mobile unit to use as a temporary branch.

Contract workers have been setting up a 1,420-square-foot mobile home at 201 First Ave. N.E., a vacant former car lot at the corner of Baker Street. When you look at all the work — anchoring the thing to the ground, hooking up water and sewer, and so forth — it doesn’t look all that “mobile” to me.

The Albany planning division approved a site plan for the unit on Sept. 4. The approval is good for a year and can be renewed for another year. Seattle-based Washington Federal told the city it expects to need the place for 18 to 24 months while it remodels its Albany branch, the former State Savings building at 300 Ellsworth St.

I asked the branch manager in July about the reason for the remodeling, but she needed to check with headquarters, and nobody got back to me since.

Meanwhile, three blocks to the west, the former Wells Fargo branch at First and Broadalbin stands empty after being closed last month. As far as I can tell, nobody knows what’s going to happen to the building. What can you do with a cavernous hall built in the style of banks a century ago? (It was built in 1916 for the First National Bank and then had four more floors.)

When I looked in the window a few days ago, the big Wells Fargo wall sign and the furniture were gone. Here’s a thought: If they knew another bank wanted a temporary office downtown, couldn’t they have made a deal?

As far as I can tell, nobody knows what’s happening to the property. CARA’s “retail refinement plan” of 2011 showed the Wells Fargo building and parking lot as a public space called “Albany Plaza.” But if the urban renewal district is trying to acquire the site now that the bank is gone, it has not said so. (hh) 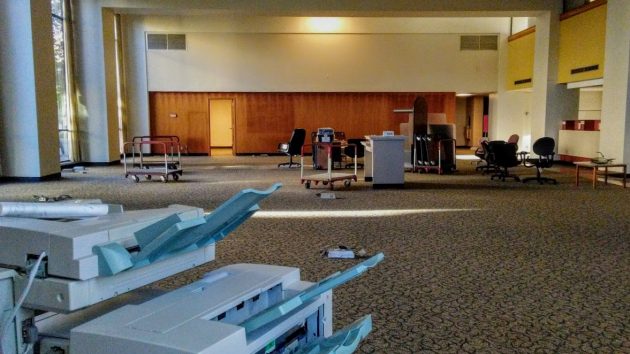 The cavernous interior of the former Wells Fargo bank on Sept. 9.