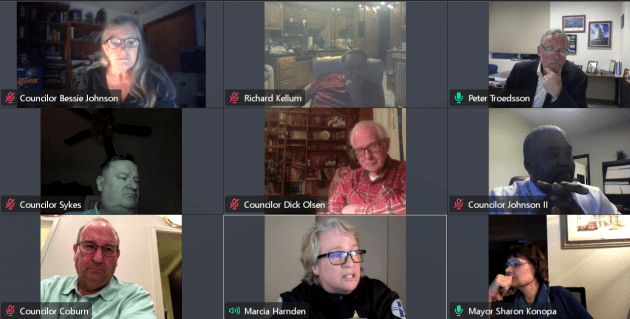 It was a coincidence that didn’t mean anything. But the fact is that both the Second Amendment and the subject of potential election-related violence came up at the tail end of the Albany City Council’s meeting Monday night.

Albany police don’t expect trouble connected with the general election, but if there is any they’ll respond the way they would to any other call. That, essentially, is the gist of what Marcia Harnden, the chief of police, told the council.

The city manager had asked her to address the council in view of the widespread speculation in the media about potential violence in some cities on or after the election Tuesday.

Harnden said her department had no actionable intelligence about any potential violence, and she understood the same was the case in Corvallis.

Albany police will, however, increase security at the official ballot drops in the city. And if  anything happens, the police will respond as they normally do.

Regarding the Second Amendment, guaranteeing the right to bear arms, the council last April postponed action on a resolution affirming the council’s support of this part of the Constitution. In the face of vehement opposition from about 30 email and letter writers, the action was put off until the council once again has an actual meeting where people can show up in person to give their views.

Councilor Mike Sykes had asked for the resolution last February. At Monday’s digital work session, he said it now appears the council won’t meet in person again soon, and he requested that the resolution come up again before the end of the year. Sykes did not seek re-election after one four-year term and will be off the council starting Jan. 1.

Neither the mayor nor other council members reacted to Sykes’ request Monday. So it’s uncertain whether the gun-rights resolution will come before the council for a vote. (hh)