Two cougar bills: Another round 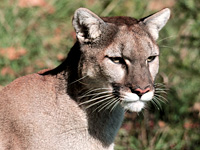 In Salem, the House Agriculture Committee spent a long public hearing Tuesday beating what appears to be a dead horse — or in this case, the issue of hunting mountain lions with hounds. Then the chairman, Democrat Brad Witt, closed the hearing without giving any indication if there will be another, or a work session at which a vote might be taken.

At issue are two bills. One is House Bill 3395, sponsored by Republican Sherrie Sprenger of Scio, which would authorize the state wildlife department to conduct so-called pilot programs of hunting cougars with dogs. Counties could decide to join the programs. The other is House Bill 2624, sponsored by Democrat Brian Clem of Salem, which would allow counties to hold elections on whether to allow cougar hunting with dogs.

The testimony was the same as in previous sessions when cougar-hunting bills died. Speakers representing hunting and ranching interests favored the bills. The Sierra Club and the Humane Society of the United States, as well as cougar defender Jane Miller of Turner, opposed them. The backers talked about predation on game animals and livestock; the opponents saw no need to overturn the hound-hunting ban supported by voters in 1994 and 1996.

Strangely, complaints about cougars dropped sharply last year to the lowest number since 1993. And more cougars were legally hunted without dogs in 2012 than in 1994, when hounds were still allowed. Chances are the majority of the Ag Committee will look at the numbers and conclude there’s no need to change the law. (hh)