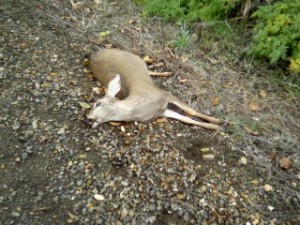 By the side of a road outside of Medford earlier this fall.

I’ve not kept count, but maybe I should have. I’m talking here about the dead animals I have seen by the side of the road while riding my bike. In a car, going 40 or 50 miles an hour, you don’t usually see these things. You go by too fast, and you’re not looking at the roadsides or the ditches. On a bike, or on foot of course, you look around and you see all those carcasses left in the wake of passing cars and trucks. Sometimes you don’t see them but you know they’re there because you can smell them. I got to wondering whether anybody keeps track of how many animals die in so-called WVCs. That’s “wildlife-vehicle collisions.” As far as I could tell nobody does in Oregon. But as it happens, efforts along that line have been reported from California and Maine. The one in California is organized by the Road Ecology Program at UC Davis, and it has recruited hundreds of cyclists and other observers to report any road kill they see. In August 2010, the California Roadkill Observation System issued its first report, saying that more than 250 observers had documented more than 6,000 kills. Raccoons were the most frequent victims, following by skunks, ground squirrels, possums and deer. The Humane Society of the United States estimates that a million animals are killed in collisions on American roads every day. Aside from the numbers, what’s surprising to me is how many birds I see on mid-valley roads. You’d think they could fly out of the way. But evidently some drivers are too fast, even for birds. Road kills of wildlife have been a problem as long as we’ve had roads and cars. One report on the issue came out in 1920. Now it’s probably worse. We could make things better if while driving on county roads, we just slowed down. (hh)