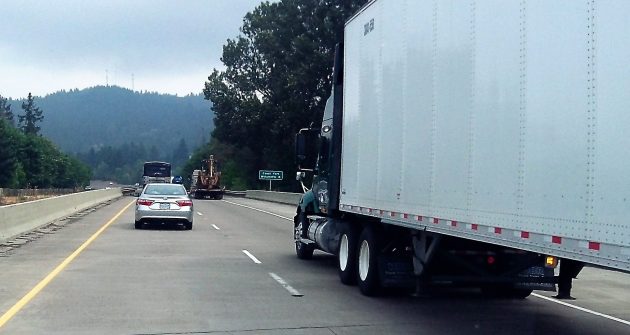 Cars and trucks — and a bus –on I-5 near Cottage Grove on September 9.

Will raising the speed limit for trucks make a difference on Oregon freeways? We’ll find out as soon as ODOT gets around to completing the paperwork and installing new signs.

Meeting in Salem last Friday, the Oregon Transportation Commission approved the recommendation of a committee that the posted speed limit for trucks be raised from 55 to 60 mph on most segments of interstate highways.

The  change was recommended by the state’s Speed Zone Review Panel and was based on the report of an engineering investigation. In the report, the state traffic/roadway engineer recommended raising the truck limit to 60 mph on all the freeway segments where the limit now is 55 mph for trucks and 65 mph for cars. One exception: In Roseburg, the report recommended keeping the limit at 55 for trucks and lowering it to 60 mph for cars, the same as on other urban segments of I-5.

As I reported earlier, ODOT engineers found that trucks already travel at an average speed near 60 mph. Their report also said that most drivers go at a sped they feel is comfortable and safe. If that’s so, then the increase in the limit will not necessarily raise the actual speeds of traffic on the road.

When will we know? ODOT spokeswoman Shelley Snow says the highway staff now will have to write and adopt rules to reflect the commission’s action last week. Then it’s a matter of getting new signs made and installed. She figures the new speed limit for trucks — and for cars on I-5 in Roseburg — will take effect in a couple of months.

It will be helpful to the flow of freeway traffic if the change reduces the number of times when trucks clog up the left lane when passing other trucks moving just a mile or two an hour less. (hh)