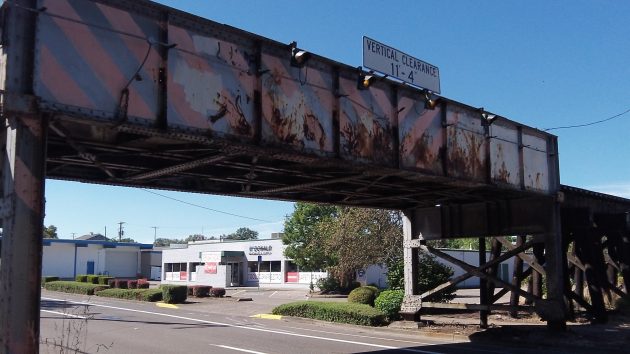 Albany’s First Avenue trestle bears the marks of standing up to countless vehicles taller than 11-4.

For the first time that I can remember, the Albany City Council has talked about the truck-munching trestle on First Avenue and whether anything could — or should — be done about it.

Over the decades, every few weeks or months, the railroad overcrossing at Lafayette Street and First has been chewing up the tops of tall rigs whose drivers failed to notice or heed the signs, lights and warning chains, not to mention the designated detour for trucks.

Last Wednesday, Councilor Floyd Collins brought the subject up to his fellow members of the city council, and a brief but free-wheeling discussion ensued. There were various suggestions for additional warning devices, including something that shoots a laser beam across the street at a height close to the 11-4 bridge clearance. When broken by the box of an approaching truck, the beam would touch off maybe a klaxon too shrill to ignore and a sign flashing “STOP NOW!” or something to that effect.

But what if there was a crash and the system had failed? City Attorney Jim Delapoer worried about city liability in a case like that. And anyway, he asked, property damage aside, has anyone actually been injured in any of the trestle crashes over the years? No one knew of anyone getting hurt, but there’s always the possibility, isn’t there?

There was talk that an elaborate warning system might cost from $30,000 to $50,000. And beyond the capital cost, Councilor Bill Coburn reminded everyone, there’s the continued expense of operations and upkeep.

The mayor, Sharon Konopa, put part of the blame on drivers unfamiliar with Albany relying on GPS devices. Could all GPS companies somehow be reminded to advise their users of the less-than-standard trestle clearance? As an alternative, Collins suggested, how about asking ODOT to show the trestle as a problem spot on its TripCheck maps?

Transportation systems analyst Ron Irish said he reached out to the Portland & Western Railroad about the trestle but had not yet received a response. One of the suggestions — I think it came from Councilor Rich Kellum — was that the blinking lights at the top of the trestle were hard to see in daylight. The implication was that stronger lights might help.

Or how about just repainting the steel structure in some bright color?

The upshot, as summarized by Collins in an email to me when I asked him what he remembered of the discussion: “Staff is to continue to seek out reasonable alternatives and come back to council.”

So something might eventually be done. Or not. (hh) 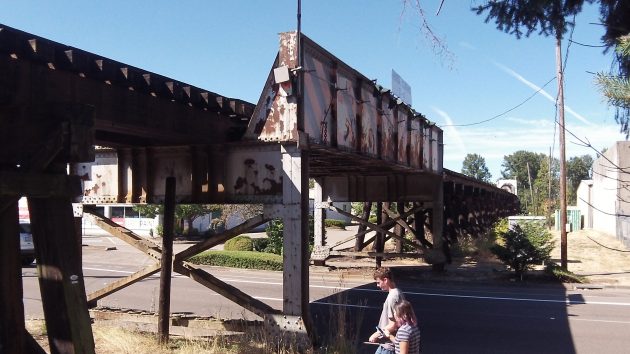 Unlike truckers, pedestrians can clear the bridge while looking at their phones.