Trouble spot on 20 waits for a fix 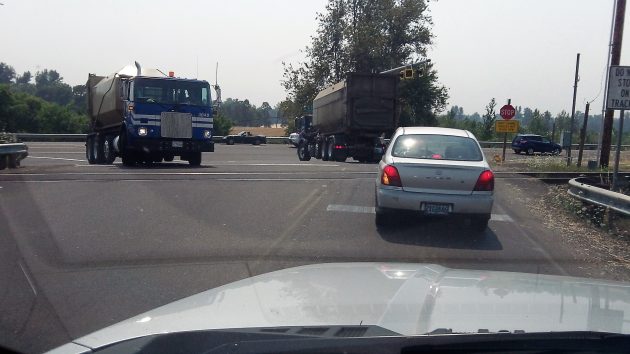 This is where Independence Highway runs into U.S. 20, the Albany Corvallis Highway. It’s a tricky place for making left turns on to 20, toward Albany, as one of these trucks is waiting to do.

But improving the junction is not among the first safety projects ODOT has been planning for this road, used by up to 20,000 vehicles a day. And whether this trouble spot will be fixed with additional funding authorized by the 2017 legislature has not been decided.

So far ODOT has identified four projects for construction, not including anything at Independence Highway. They are a two-way turn lane between the Children’s Farm Home and Merloy with a tentative construction date in 2020; a left-turn acceleration lane at Granger and shoulder widening between Garland Nursery and Granger (2020-2021); better curve warning signs all along the 11-mile highway (2021); and signal upgrades at Circle and Conifer in Corvallis (2020-2021).

Savannah Crawford, the project delivery coordinator in ODOT’s Area 4 office in Corvallis, told me by email: “Over the next few months, we will be working to identify additional projects for the HB 2017 work, assign project managers, hire consultants to assist in design, and have a framework in place for each of these projects.”

What about the Independence junction?

“We will be using the US 20 Safety Study prioritization list to focus on which projects to fund,” Crawford replied. “Since the Independence Highway intersection is among those listed, it will be considered, but we haven’t had any detailed conversations to determine which projects will actually be funded.”

In other words, at busy times of the day drivers trying to turn toward Albany from Independence Highway will continue to have trouble,  meaning long waits for simultaneous gaps in the almost continuous east- and westbound traffic, for a good long time. (hh)