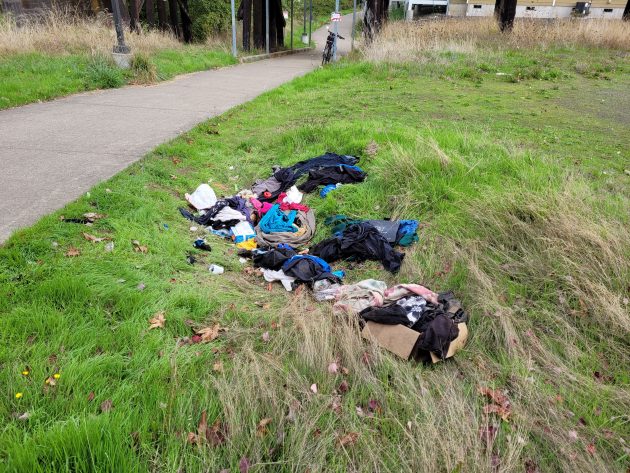 This pile of trash was left along the Dave Clark Path last week.

Trouble appears to be on the rise in Albany parks and on the park system’s trails. To try to get a handle on it, city officials are proposing to hire a park services officer to go on patrol and enforce the rules.

The proposal comes before the city council at its work session Monday afternoon (Oct. 11). And if the council agrees on Monday, the plan will be up for a vote during the regular meeting on Wednesday night.

The person in the proposed position would patrol the parks and trails to try to reduce the illegal activity. The officer would enforce park regulations and other city ordinances and would also respond to calls about goings-on in the parks, on the trails and at park facilities.

The employee would be represented by the police association. The job would cost the city an estimated $95,000 a year in pay and benefits, plus $24,000 for a utility truck, and $500 for uniforms and equipment.

Unlike other cities, Albany has so far avoided the pattern of massive homeless camps along public paths. But like others, I too have noticed an apparent increase in camps and dump sites , especially along the Dave Clark, Periwinkle Creek and Cox Creek paths.

It’s hard to see how a lone park officer could prevent or otherwise deal with all of that, but having a city employee on regular patrol should help. (hh) 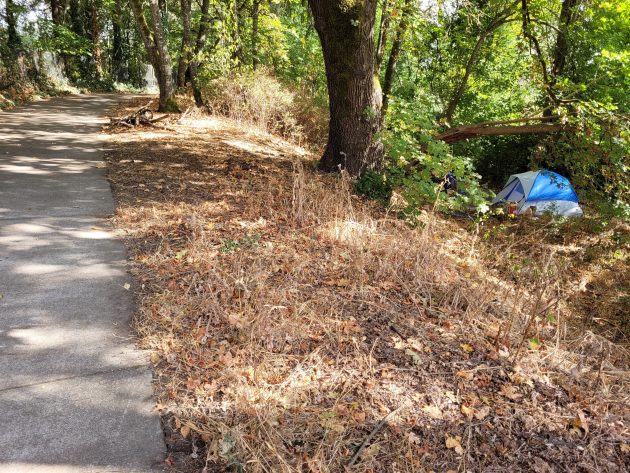 A tent was pitched along the banks of Cox Creek on Sept. 8. It was gone a few days later.


11 responses to “Trouble in parks: City proposes officer to patrol”