There were never any good excuses for trucks hitting the trestle on Albany’s First Avenue, and as the video shows (after some wobbles inherent in one-handed videography while steering a bike) that’s even more true now that bright new flashing lights have been installed as an additional warning.

I reported before on the Albany city administration’s efforts to further reduce the chances that unwary drivers would ram their trucks into the railroad bridge, where the 11-foot-4 vertical clearance is less than standard.

There had been flashing lights by the side of the street a block ahead of the trestle, in addition to truck-detour signs. But late last year, as a first step, after discussions at the city council, the city made those roadside flashing lights brighter. It also got the Portland & Western Railroad’s consent to replace and improve the four warning lights on the bridge itself. The bridge lights had been on the dim side, barely noticeable, and the two in the middle had been burned out for some time.

Going down First on my bike Thursday, for the first time in weeks, I could not help but notice the new flashing trestle lights even from two or three blocks away. Even if they miss the other warnings, there’s now a much better chance that drivers of tall rigs will see those lights and stop or turn before it is too late. (hh) 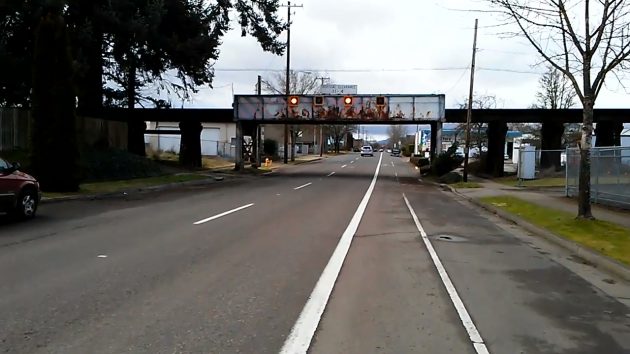 You can see the new lights from a good distance.