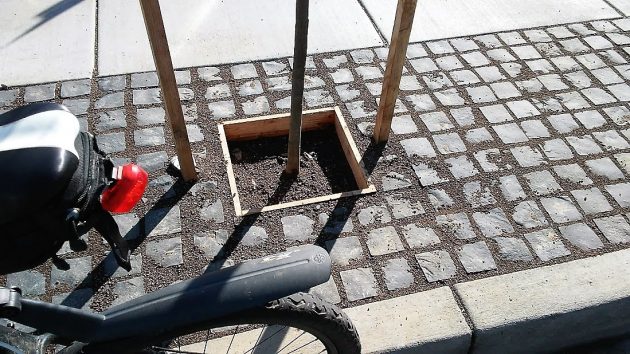 So what’s with those wooden frames, square and sturdy as they look, around the newly planted trees in Albany’s downtown streetscape reconstruction?

I wondered whether the frames were intended to answer the complaint that some of the more than 200 new street trees in the downtown project had been planted too deep in the ground to thrive. No, that’s not it, City Engineer Staci Belcastro assured me.

“The contractor is not taking a shortcut,” she emailed me when I asked. “Staff is working with the general contractor, the landscape contractor, and city forester to ensure that the trees that were planted incorrectly are re-installed correctly, and at the correct depth. The cedar frames are being installed to retain the pavers and keep the sand installed around the pavers from falling into the tree well.”

The contract also provided for installing new 210 tree wells. (I guess 14 of the new trees went in existing spots.) At the bid price of $2,200 each — including pavers, sand and presumably the cedar frames — the tree wells came to $462,000.

What else is new with the streetscape project?

At Monday’s city council work session, Councilman Bill Coburn brought up the steel plates covering trench cuts in Ellsworth and Lyon streets. He urged the city staff to get the contractor to put down additional asphalt at the edges to lessen the jolts that motorists have been feeling. ODOT is scheduled to repave those two legs of Highway 20 this summer.

City Manager Peter Troedsson gave the council an update on the streetscape project last week. Furnishings including trash cans, benches and bike racks have arrived, he reported, and the cans were to be put in this week. The benches and bike racks will wait until paving and striping is complete later in the year.

Now, if we could just get those trench cuts smoothed out … (hh)