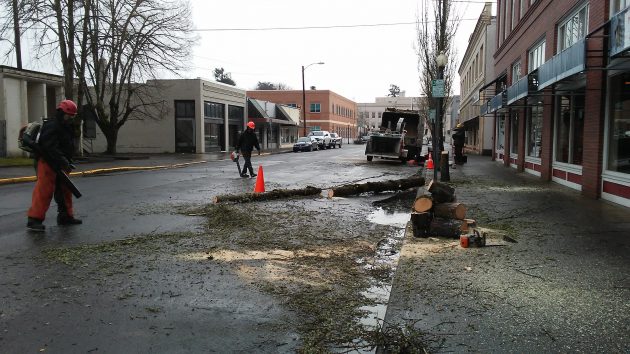 The cutting down of more than 100 street trees in downtown Albany has begun. No great news here, just noting the start of yet another early phase of the $8.4 million streetscape improvement program taking place this year.

The city contracted with Buena Vista Arbor Care, the low bidder at about $99,000, to take down trees that will be replaced with new and different ones in the course of the street reconstruction scheduled later this year. The cutting was being done in the winter to avoid complications with the Migratory Bird Treaty Act of 1918 as amended, which prohibits doing harm to any of dozens of species of birds.

The trees — 130 of them, the city said — are coming down on Second Avenue between Washington and Lyon streets, Third between Ferry and Lyon, Broadalbin  between Second and Third (where the top photo was taken), and Ellsworth and Lyon from First to Eighth.

The city administration announced in early January that the tree cutting would start Jan. 11 and be done by and end of February. I don’t know when they actually started, but I hadn’t noticed the work until this week.

Doing the work in the winter, I realized, was a smart move even if it had not been for the birds. With the foliage already gone anyway, the streets without trees don’t look much more bare than they did with the trees in place. (hh) 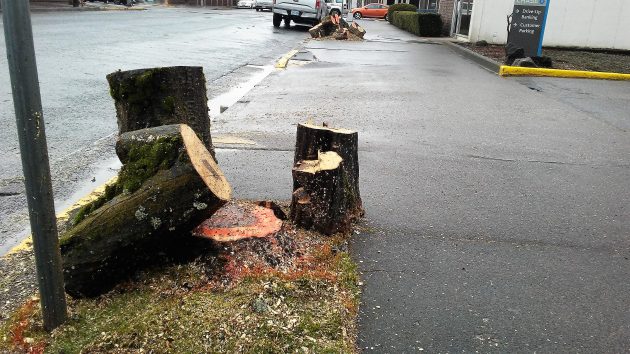 The scene on Third between Lyon and Elllsworth.