Trash cans in the bike lane: A common lament 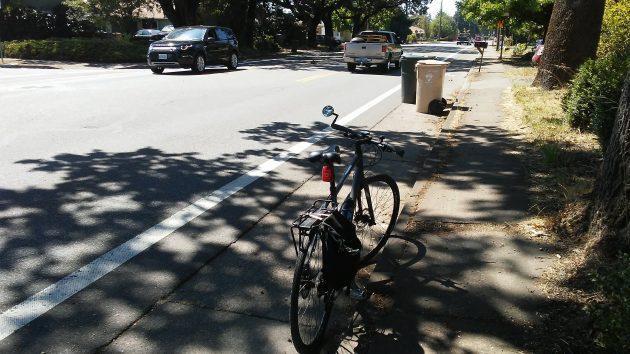 Looking west along the bike lane on Salem Avenue on Monday afternoon.

Bill Clotere, a reader in North Albany, had a suggestion for a “topic for a boring day”: Trash cans in the bike lanes, sometimes left there long after the pick-up day has passed.

Bill and I have been acquainted since he managed the Sears store downtown, some 30 or 40 years ago. The other day he sent an email that said in part: “A neighbor and I have been riding about 5 miles daily, and (our) route usually includes Spring Hill and North Albany Road. And a can or two in the bike lane can be a real terrifying experience!”

This is a common complaint from people on bikes not just here but all over Oregon and elsewhere, as you’ll find if you google it. Sometimes there’s something that could be done about it if people cared. Other times no, there’s nothing that can reasonably be done even if people do care.

Take Salem Avenue in Albany, for instance. There’s a bike lane, but no parking lane. People living along the street could put their trash cans and their bins for recycling and yard debris on the curb. But in some places that would obstruct the sidewalk. And if a disabled person came along in a wheelchair, he’d be stuck.

For people on bikes, bins in the bike lane are much less of a problem. We’ll just go around them, veering into the driving lane if necessary. Hoping all the time that drivers coming up from behind will see us and give us room to get around the obstruction in the lane.

It’s supposed to be unlawful to block bike lanes. But then again, people have to be able to have their trash picked up.

The way to deal with this potential conflict is for everybody to be aware and to minimize potential problems for other people: Households can get the cans back in as soon as possible. Cyclists can carefully maneuver around any cans left in the lanes. Motorists can keep an eye out and slow down if there’s a cyclist ahead and trash cans in the lane.

Seems to me this is one problem that a combination of common sense and courtesy can easily solve. (hh) 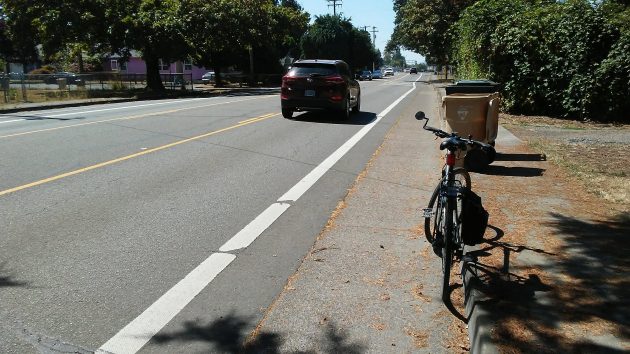 Also on Salem Avenue, trash cans on the curb, leaving the bike lane free but partially blocking the sidewalk.


6 responses to “Trash cans in the bike lane: A common lament”