Transparent state? Not so much! 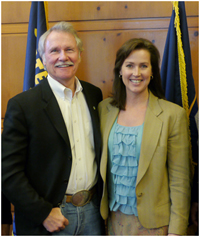 The happy couple in earlier times.

One thing the Kitzhaber-Hayes story shows is that the governor’s judgment in running his office leaves something to be desired. Now it also illustrates that Oregon’s claim to run a completely transparent government is a sham.

The public records law supposedly enables the voters to find out what their officials are doing in their official capacity. But we have allowed state and local governments to prevent timely access to official records to such an extent that the law has lost much of its punch.

Governor Kitzhaber declared his girlfriend, now his fiancee, to be Oregon’s “first lady.” He gave her a desk in the governor’s office, a role as an adviser on energy policies and who knows what else, and a page on the governor’s official website. Then it developed that years ago she, in return for money, defrauded the government with a sham marriage to get around immigration laws. Then it further developed that she was paid by outside organizations as a consultant even as she worked as an adviser in the state administration.

When Willamette Week and other papers started reporting this, the governor asked for a review by the state ethics commission. Apparently he himself is unwilling or unable to see that the consulting contracts were improper under the circumstances. Now, The Oregonian reports that the governor’s office has stonewalled requests for public records that would shed further light on the acivities and work relationships of Cylvia Hayes. The governor’s office has even, according to The Oregonian, interceded with the State Police regarding a media request for the log of visitors at Mahonia Hall, the governor’s Salem residence, and the police are delaying releasing the records pending a review of privacy and security issues.

Meanwhile, the state Energy Department says it’s willing to comply with a request for records on Hayes’ work related to the department only if The Oregonian pays it $3,386, the amount the state claims it costs to review the papers first. What a crock! But this is common now. Requests for controversial or potentially embarrassing public records are often denied on the grounds of privacy or sidetracked with a demand for exorbitant payments, payments intended to discourage citizens from pressing their demands.

It is good that we are seeing a dramatic demonstration of how the public records act has been made all but toothless, especially now, just before an important election. The governor is telling us that where his lady is concerned, the state’s business is none of the public’s business. And if the voters re-elect him anyway, as they may, they’ll be sending a message: Go ahead and pull the wool over our eyes all you want; it’s fine with us. (hh)


6 responses to “Transparent state? Not so much!”