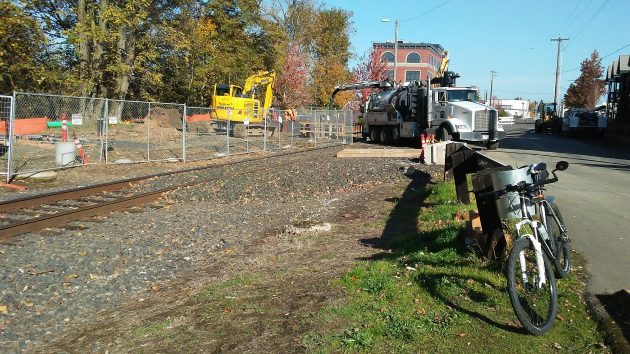 For weeks the Portland & Western’s Water Avenue rail line has been blocked by equipment to build a sewer pump station, and you may have thought this has crippled railroad operations. But apparently it hasn’t, because the track is opened up again every night.

I wondered about this and asked Staci Belcastro, the Albany city engineer.

“Luckily, the train on this line runs at night, just one in either direction,” she reminded me. “Working hours for the project are generally between 7 a.m. and 6 p.m., and the contractor makes sure the railroad tracks are clear before they leave each day.”

Ron Green, one of the residents and property owners in the townhouses across Water Avenue, recalls that when the project began, the contractor laid down gravel between and around the rails to support all the heavy equipment needed for the construction. But the excavators and trucks and other heavy rigs block the track only during the day.

“Each day at quitting time they move the stuff out of the way and fasten the fence shut between the track and the site,” Green told me by email. “I’ve seen a couple of daytime trains/rail cars go by, and there was obviously a message sent to let that happen.”

The pump or “lift” station there is part of a new sewer main that Pacific Excavation is building under a $7.2 million city contract. The so-called “force main” is intended to prevent overflows to the Willamette River when the existing main sewer, the Riverfront Interceptor, can’t handle all the load during periods of heavy rain.


One response to “Trains blocked by sewer work? Not really”