Trains and signs: The latest on Albany Station 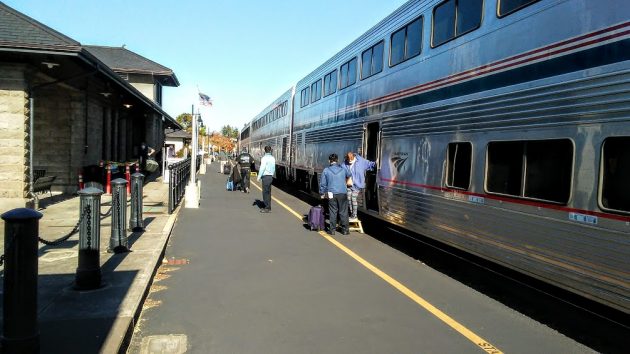 Amtrak Train 14, the Coast Starlight, at Albany Station Thursday, about two hours late after a collision with a car at Ellingson Road.

Train service has been further reduced, but new automated signs are being installed. That about sums up the latest from Albany Station.

The latest service reduction came at the start of this week, when Amtrak cut back the daily Coast Starlight trains between Seattle and Los Angeles to three times a week because of a decline in travel caused by the Covid-19 epidemic.

Early in the Covid crisis, Oregon reduced the schedule of the Amtrak Cascades trains and buses between Portland and Eugene. At Albany Station now there’s only one Cascades train a day in each direction, heading north in the morning and coming back at night.

I happened to be at the station Thursday afternoon, inquiring about the schedule cutback and the new signs I had heard about, when Train 14 pulled in about 3:30. Normally it comes through a little after 1. On Thursday, though, the train had hit a car on the Ellingson Road crossing south of town. The driver was killed.

What about those signs, the kind that have been in use for some time at the stations in Eugene and Salem? Well, they offer information about when trains are scheduled, and they announce arrivals via a pubic address system. Amtrak is putting them in, and judging by the construction activity they’ll be installed at the station’s four corners.

The announcements will be automatic based on the timetable, as I understand it, but an agent can override the automated system when conditions make this necessary.

Does this move toward automation signal an intent by Amtrak to stop staffing Albany Station? No, I was told, at least not at this time.

That’s a consolation of sorts. If the station was fully automated, the waiting room presumably would have to be closed. This would be rough on people waiting for trains when the winter weather gets bad, especially when trains are an hour or two late. (hh) 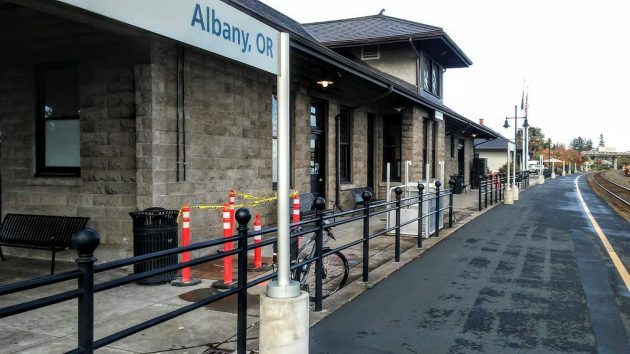 The orange markers show where preparations have started for the new signs at Albany Station.


4 responses to “Trains and signs: The latest on Albany Station”