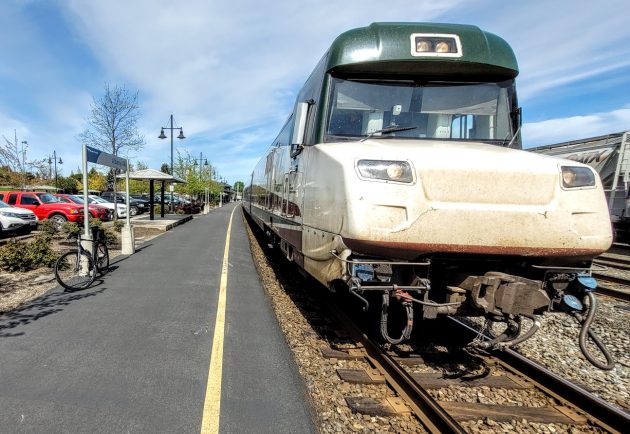 There one thing you can say for this Amtrak locomotive. It looks goofy from the front.

Just before 3 on Wednesday afternoon, a southbound train of Amtrak’s Cascades service was parked at Albany Station. I wondered if there was something wrong.

As I learned from the Amtrak agent in the station, the train had been there since about 1:15. It wasn’t moving because the track on Union Pacific’s main line was blocked by a disabled freight near Shedd.

I don’t know how many passengers there were on board this train. But whatever their number, they were put on a bus to Eugene. That’s the southern terminus of the Cascades service, which runs between Eugene and Seattle and Vancouver, B.C..

The service is supported by the state transportation departments of Oregon and Washington. The amount of this expense for ODOT escapes me at the moment because the online version of the current state budget makes it impossible, at least for me, to find. I’ll try to find out, though, and will add it later.

Starting some 10 years ago, Oregon launched an elaborate process to write an environmental impact statement on increasing rail service between Portland and Eugene and reducing the travel time. The statement was published year ago, but nothing has happened on that front since.

In 2020 the Covid outbreak sharply reduced ridership on all Amtrak routes, including the Cascades trains and the Coast Starlight, which also stops in Albany. The number of trains and schedules was cut back.

But this March, the agent told me, Amtrak restored the daily schedule of the Coast Starlight, between Seattle and Los Angeles.

As for the hapless Cascades train stranded at Albany Station Wednesday, it was gone later in the afternoon. (hh) 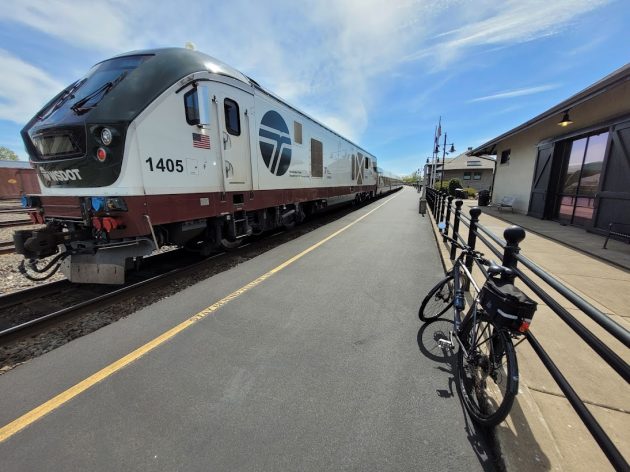 The streamlined rear end of the Amtrak Cascades Talgo train set, on Wednesday at Albany Station.